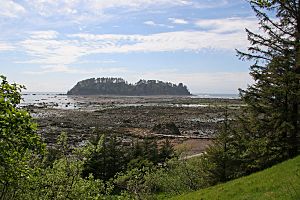 Cape Alava, in Clallam County, Washington, U.S., is the westernmost point in the contiguous 48 states, with a longitude of 124° 44′ 11.8″ W (during low tide and walking out to the west side of Tskawahyah Island). The westernmost point is located in Olympic National Park and the Makah Indian Reservation. Cape Alava is accessible via a 3-mile (5 km) boardwalk hike from a ranger station in the park. Cape Alava Trail was designated a National Recreation Trail in 1981.

Nearby Cape Flattery and Cape Blanco in southern Oregon are also very close longitudinally to being the westernmost points in the contiguous 48 states.

The cape was named after the Spaniard Don José Manuel de Álava (born in Vitoria, January 1, 1743) for his role as commissioner during the solution of the conflict of Nootka in 1794. 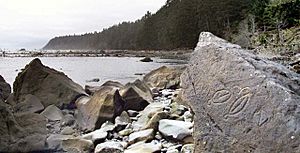 In early 1834, a Japanese ship, the Hojun Maru, made landfall at Cape Alava after a 14-month drift on the Pacific Ocean. It was supposed to bring rice to Edo, but was then carried away by a storm. At the time of arrival near Cape Alava, only three of its crew were alive (the youngest being Otokichi). They were then looked after and briefly enslaved by Makah.

The Cape became the western terminus of the newly created Pacific Northwest Trail with the passage of the Omnibus Public Land Management Act of 2009.

The beaches surrounding the trail terminus are composed of a variety of different rock types and formations.

The rich mixture is a result of the combined erosive power of the ocean and relatively recent glacial activity. According to the Washington State Department of Natural Resources, the area's sediments are classified as Unconsolidated Deposition, translating to the geological equivalent of a grab bag. More finely, the deposits are listed as “Quaternary Sediments, Dominantly Glacial Drift, includes alluvium”. The Quaternary time period dates to the end of the most recent ice age, roughly 10,000 to 14,000 BCE. A geologic map of Washington shows the unique nature of such sediments being exposed to the full grinding force of the Pacific Ocean. There are many such areas scattered about the Puget Sound, yet very few areas on the unprotected Washington coast.

Cape Alava is the western terminus of the Pacific Northwest National Scenic Trail.

All content from Kiddle encyclopedia articles (including the article images and facts) can be freely used under Attribution-ShareAlike license, unless stated otherwise. Cite this article:
Cape Alava Facts for Kids. Kiddle Encyclopedia.