For many years, the city's economy was fueled by the local timber industry. More recently it has drawn tourism related to the novel series Twilight and movies of the same name, set in Forks. With recent declines in the timber industry, Forks has relied on the nearby Clallam Bay Corrections Center and Olympic Corrections Center as sources of jobs. Forks is a popular destination for sport fishers who fish for salmon and rainbow trout in nearby rivers. It is also supported by visitors to Olympic National Park.

Forks was officially incorporated on August 28, 1945, following an election of the constituents who would become its first town members.

The city gained popularity for being a key setting in Stephenie Meyer's Twilight series (2005 to 2008) and related film adaptations. The city's atmosphere and idyllic Pacific Northwest setting has inspired its being featured in film, literature, and video games.

There were 1,264 households of which 40.9% had children under the age of 18 living with them, 46.0% were married couples living together, 13.5% had a female householder with no husband present, 7.7% had a male householder with no wife present, and 32.8% were non-families. 25.3% of all households were made up of individuals and 8.2% had someone living alone who was 65 years of age or older. The average household size was 2.72 and the average family size was 3.16. 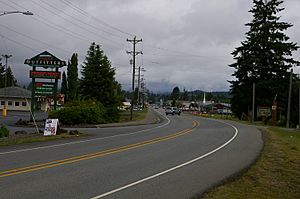 There were 1,169 households out of which 36.9% had children under the age of 18 living with them, 49.4% were married couples living together, 11.4% had a female householder with no husband present, and 32.2% were non-families. 24.6% of all households were made up of individuals and 7.4% had someone living alone who was 65 years of age or older. The average household size was 2.65 and the average family size was 3.15.

Forks has an oceanic climate in a temperate rainforest with very high rainfall. Although there is a drying trend in summer, rain is still abundant, just not as wet as the rest of the year. Forks averages 212 days per year with measurable precipitation. The Olympic rainforest surrounds the town.

According to the United States Census Bureau, the city has a total area of 3.65 square miles (9.45 km2), all of it land. 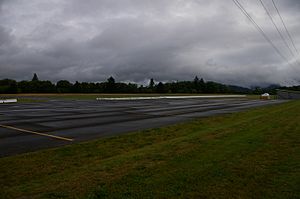 Forks Municipal Airport (IATA: S18, ICAO: KS18, FAA LID: S18) is located in Clallam County, 1 mile (1.6 km) southwest of Forks. The Airport has six based aircraft, including 3 single-engine aircraft and 3 helicopters. The latest available data indicate that the Airport had a total of 13,550 annual operations.

Runway 4-22 is Forks Municipal Airport's sole runway. This runway is 2,400 feet (730 m) long, 75 feet (23 m) wide, is equipped with medium intensity runway lighting, and has an asphalt surface. Approaches to both ends of this runway are visual.

Forks is served by two public transit agencies. Clallam Transit route 17 provides local service in Forks, while three other routes provide connections to Port Angeles (14), La Push (15), and Clallam Bay and Neah Bay (16). Jefferson Transit runs an "Olympic Connection" bus that provides service on Highway 101 south of Forks as far as Lake Quinault. From there, transfers to Aberdeen are available via Grays Harbor transit. All five of these bus routes serve Forks six days a week, with no service on Sundays. 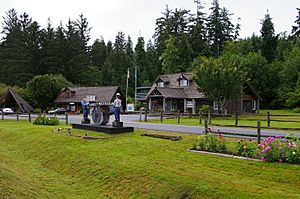 On the south end of town is the Forks Timber Museum. Constructed in 1989 by the Forks High School carpentry class, the 3,200-square-foot (300 m2) building provides a look into the local history of the timber industry, loggers of the past, and their tools of the trade. The museum has exhibits depicting local history dating to the 1870s. 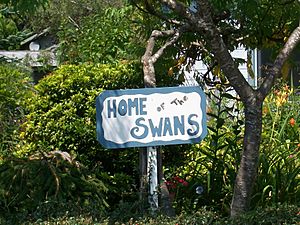 Signs related to the Twilight book/movie series that is set in Forks, Washington 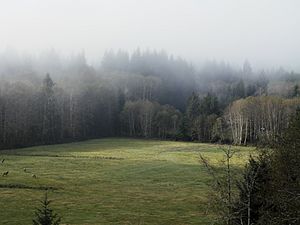 Field in Forks, elk on the left side.

Forks serves as the hub for numerous day excursions to the Hoh Rainforest, the Pacific Beaches, and various wilderness trails.

Another source of tourism is Stephenie Meyer's Twilight series, which is set in the town. Tours are available of locations that resemble the places described in Meyer's books. The films were not shot in Forks.

Forks is well known for its winter steelhead fishing with the Quillayute river system - the Hoh, Sol Duc, Bogachiel and Calawah rivers. Other nearby Clallam, Sekiu and Hoko rivers are also good for king salmon fishing and steelheading as well. Local guides are available for both native and hatchery runs and for float trips. Fishing gear and clothing is available at local stores. 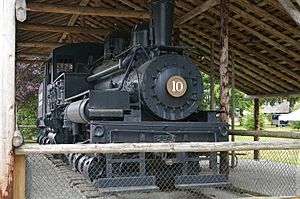 Forks displays one of a few Shay engines remaining in Washington. Shay locomotives are unusual in that they have a crank shaft running down the side, powering all wheels. They were designed to be used to transport lumber out of forests. Rayonier #10 (c/n 3348) was built for stock by Lima in 1930. It has three cylinders and three trucks. The Ozette Timber Company bought it 11 years later. In 1945 it was acquired by Rayonier for their lumber operation near Forks. It was retired near the north end of Forks in Tillicum Park in 1959.

The Forks Lions Club erected an attractive shelter over the #10 in 1999. It has also built and maintained most of the structures in the Shay Tillicum Park over the last 40 years. 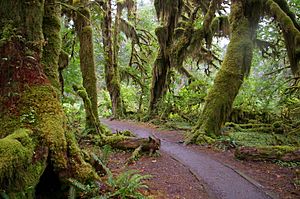 Trail in nearby Olympic National Park

Rainfest, a celebration of the arts sponsored by the West Olympic Council for the Arts, occurs in April. It includes a combination of arts and craft related events. In recent years quilt classes and a quilt show have been sponsored by the Piece Makers Quilt Club.

In March of every year, the Quillayute Valley Scholarship Auction occurs. This annual fundraising event raises tens of thousands of dollars for scholarships. Since the first scholarship award in 1964, to Robert Henry (now D.D.S.), the Committee has awarded over US$1m in scholarships to Forks students.

In the summer, Forks hosts its traditional "Old Fashioned Fourth of July" celebration with a Grand Fourth of July Parade. The numerous events include a demolition derby and fireworks display. July is also the month for Quileute Days at La Push with its parade, traditional salmon bake, bone games, softball tournament, canoe races, and street fair. In August, the Forks Family Festival combines arts and crafts vendors with children activities.

In late September, the Forks Chamber of Commerce partners with the Quileute Tribe and the City of Forks to host the Last Chance Fishing Derby at La Push; cash prizes are offered to those wanting to fish for salmon on the Pacific Ocean. The first week in October is when the community celebrates its heritage during Heritage Days. One of the more celebrated events during this week-long festival is the "Old Timers Round Table;" this is a moderated conversation broadcast live via the local radio station, featuring longtime residents of the region talking about days long past.

The Forks City Council passed a resolution in 2007 celebrating "Stephenie Meyer Day" in honor of the Twilight young adult novels and film series, set for September 13, the day before the fictional Bella's birthday. In 2015 the event was still driving tourism, with visitor numbers peaking in 2010, then settling to 50% more than before the Twilight phenomenon.

All content from Kiddle encyclopedia articles (including the article images and facts) can be freely used under Attribution-ShareAlike license, unless stated otherwise. Cite this article:
Forks, Washington Facts for Kids. Kiddle Encyclopedia.