The Calawah River is a 31 mi (50 km) tributary of the Bogachiel River in Clallam County in the U.S. state of Washington, on its Olympic Peninsula. Its two major tributaries are the South and North Forks Calawah River. The river drains an unpopulated portion of the low foothills of the Olympic Mountains; its entire watershed consists of virgin forest. The river drains 129 square miles (330 km2) above U.S. Highway 101, which crosses the river about 6.6 miles (10.6 km) upstream of its mouth.

The river's name comes from the Quileute word qàló?wa:, meaning "in between", or "middle river". 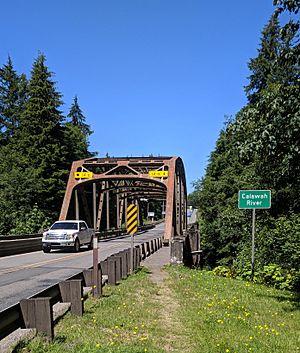 The highway 101 bridge over the Calawah River, near Forks, Washington

All content from Kiddle encyclopedia articles (including the article images and facts) can be freely used under Attribution-ShareAlike license, unless stated otherwise. Cite this article:
Calawah River Facts for Kids. Kiddle Encyclopedia.