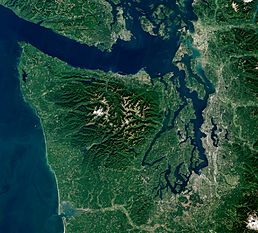 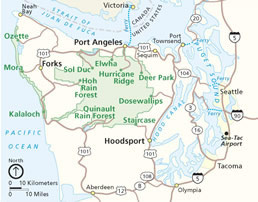 The peninsula and Olympic National Park 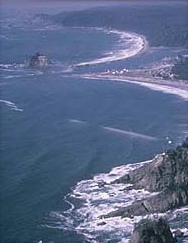 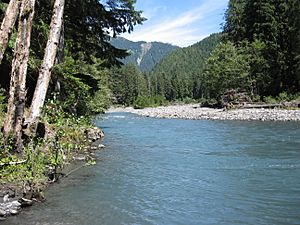 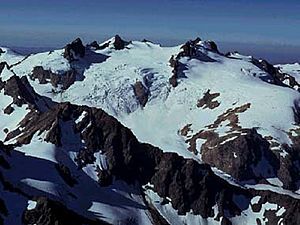 The Olympic Peninsula is a large arm of land in western Washington that lies across Puget Sound from Seattle, and contains Olympic National Park. It is bounded on the west by the Pacific Ocean, the north by the Strait of Juan de Fuca, and the east by Hood Canal. Cape Alava, the westernmost point in the contiguous United States, and Cape Flattery, the northwesternmost point, are on the peninsula. Comprising about 3,600 square miles (9,300 km2), the Olympic Peninsula contained many of the last unexplored places in the contiguous United States. It remained largely unmapped until Arthur Dodwell and Theodore Rixon mapped most of its topography and timber resources between 1898 and 1900.

The Olympic Peninsula is home to temperate rain forests, including the Hoh, Queets Rain Forest, and Quinault. Rain forest vegetation is concentrated primarily in the western part of the peninsula, as the interior mountains create a rain shadow effect in areas to the northeast, resulting in a much drier climate in those locales.

The Olympic mountain range sits in the center of the Olympic Peninsula. This range is the second largest in Washington State. Its highest peak is Mt. Olympus.

Major salmon-bearing rivers on the Olympic Peninsula include, clockwise from the southwest: the Humptulips, the Quinault, the Queets, the Quillayute, Bogachiel, the Sol Duc, the Lyre, the Elwha (see Elwha Ecosystem Restoration), the Dungeness, the Dosewallips, the Hamma Hamma, the Skokomish, and the Wynoochee River.

A major effort called the Wild Olympics campaign is under way to protect additional wilderness areas on the Olympic National Peninsula, protect salmon streams under the Wild and Scenic River Act and provide a means for Olympic National Park to offer to buy land adjacent to the Park from willing sellers.

Clallam and Jefferson Counties, as well as the northern parts of Grays Harbor and Mason Counties, are on the peninsula. The Kitsap Peninsula, bounded by the Hood Canal and the Puget Sound, is an entirely separate peninsula and is not connected to the Olympic Peninsula.

From Olympia, the state capital, U.S. Route 101 runs along the Olympic Peninsula's southern edge and up the western and northern shorelines. 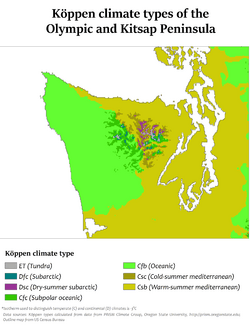 Most of the peninsula has an oceanic climate, or Cfb under the Köppen climate classification. Most populated areas, however, have a warm-summer Mediterranean climate, or Csb.

All content from Kiddle encyclopedia articles (including the article images and facts) can be freely used under Attribution-ShareAlike license, unless stated otherwise. Cite this article:
Olympic Peninsula Facts for Kids. Kiddle Encyclopedia.