La Push is a small unincorporated community situated at the mouth of the Quillayute River in Clallam County, Washington, United States. La Push is the largest community within the Quileute Indian Reservation, which is home to the federally recognized Quileute tribe. La Push is known for its whale-watching and natural environment. The community has historically been located on the coast, however sea level rise led the community to begin managed retreat to higher grounds in 2017.

The name La Push is from French La Bouche, meaning "The Mouth" of the Quillayute River, adapted into Chinook Jargon. Two well-known beaches are nearby: Rialto Beach to the north of the river mouth and La Push Beach to the south.

La Push has the westernmost ZIP Code in the contiguous United States, 98350. 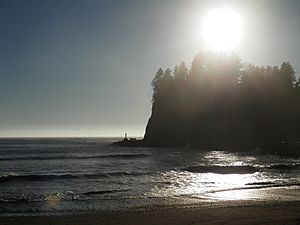 La Push has a very wet oceanic climate. The climate is moderated and strongly influenced by the Pacific Ocean, which renders very mild winters for a northerly latitude. Located to the west of the Olympic Mountains, La Push and the surrounding coastline absorb considerable rainfall dropped along the mountain front. The warmest month is August and the coolest month is December.

La Push, 14 miles from Forks, is home to the Quileute Tribe. Tribal members traditionally built cedar canoes for a variety of uses; they ranged in size from two-man to ocean-going freight vessels capable of carrying three tons. The Quileute ranked second only to the Makah as whalers, and first among all the tribes as seal hunters. They bred special woolly-haired dogs, and spun and wove their hair into prized warm blankets. According to the stories, the Quileutes only kin, the Chimakum, were separated from them by a great flood that swept them to the Quimper Peninsula on the other side of the North Olympic Peninsula. There they were attacked and destroyed in the 1860s by Chief Seattle and the Suquamish Tribe.

First treaty with European Americans occurred in 1855, when the Quileutes signed a treaty with representatives of Territorial Governor Isaac Stevens. A treaty a year later would have moved them to a reservation in Taholah, but the Quileute territory was so remote that it was not enforced. In February 1889, an executive order by President Grover Cleveland established a one-mile square reservation at La Push. At the time the town had 252 inhabitants. While villagers were picking hops in Puyallup, the town was destroyed by arson in 1889. 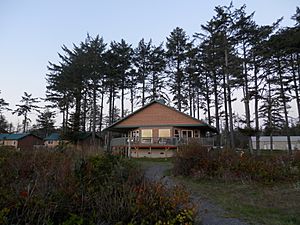 Cabin at Resort in La Push 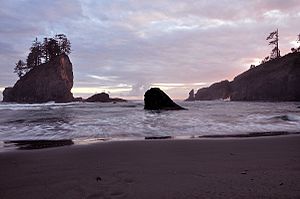 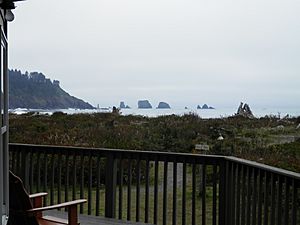 This is a view from one of La Push's cabins at the Quileute Oceanside Resort.

Today, La Push has oceanfront resorts, a seafood company, fish hatchery, and a revamped marina. Since the early 21st century, the tribe has grown more interested in tourism. La Push is a village of the Quileute Tribe that displays a slower, more relaxed way of life. All of the businesses are owned by the tribe. The Quileute Tribe has revived many of its traditional skills and crafts, which are taught at school along with the unique language. It is an isolate language, unrelated to any root language in the world, and one of only five in the world without nasal sounds.

La Push and the Quileute Tribe are featured in author Stephenie Meyer's Twilight series. The popularity of the books, published from 2005 to 2008, and the related film adaptations, has greatly increased associated tourism to the town.

The Pacific Northwest National Scenic Trail passes through La Push on the way to its western terminus at Cape Alava.

All content from Kiddle encyclopedia articles (including the article images and facts) can be freely used under Attribution-ShareAlike license, unless stated otherwise. Cite this article:
La Push, Washington Facts for Kids. Kiddle Encyclopedia.