Quilcene is a census-designated place (CDP) in Jefferson County, Washington, United States. The population was 591 at the 2000 census.

The community is located on the scenic Olympic Peninsula along the seawater-filled glacial valley of the Hood Canal. Each year many visitors enjoy the panoramic views of Mount Rainier, Puget Sound and Seattle from the summit of nearby Mount Walker, the only peak facing the Puget Sound that has a road to its summit. The Olympic National Forest lands in Quilcene hold a wealth of Douglas fir, spring-blooming Pacific rhododendrons, Oregon grape, and salal. Leland Lake is located near Quilcene.

Quilcene oysters, named after the community, have an international reputation among restaurateurs

Early inhabitants of the area were the Twana, inhabiting the length of the Hood Canal, and rarely invading other tribes. The Quilcene ("salt-water people") were a distinct band of these people.

The Wilkes Expedition charted the place as Kwil-sid in 1841. Hampden Cottle, a logger from Maine, and several other families settled there in 1860 and eventually established a town. The town was originally situated on the banks of the Quilcene river, before being moved to higher ground. The economy in Quilcene was based primarily on farming and logging and by 1880, the town had a population of 53.

The Tubal Cain Mining Company, in 1902, claimed that Quilcene would become the center for the smelting of iron, copper, gold, and manganese that was expected to be found in the Olympic Mountains; however, little ore was ever discovered.

Circa 1910, Green's Shingle Mill was a large part of Quilcene's history.

The Olympic Music Festival, based in Quilcene for 32 years until 2016, is a casual classical music event featuring world-renowned musicians that was held at a turn-of-the-century dairy farm nestled on 55 acres (220,000 m2) of tranquil farmland. The Olympic Music Festival was voted "Best Classical Music Festival" by readers of The Seattle Weekly. The music festival was founded in 1984 by Mr. Alan Iglitzin, originally intending the Festival to be a summer home for the Philadelphia String Quartet. The Festival moved to nearby Fort Worden in 2016. 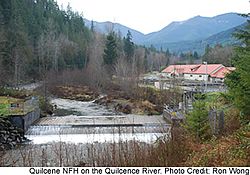 Covering 155,000 acres (630 km2) in the northeast corner of the Olympic Peninsula is the Hood Canal Ranger District. The area lies in the Olympic Mountains rainshadow and contains some of the driest ecosystems on the Olympic Forest. The district includes alpine botanical wonderlands, several major rivers, and the 50,000 acres (200 km2) of the Buckhorn Wilderness. Recreation opportunities include hiking and interpretive trails, oyster beach, campgrounds, and a self-guided auto tour. The Quilcene Ranger Station also serves as the North Hood Canal Visitors Center.

Two miles south of Quilcene and at the union of the Big Quilcene River and Penny Creek, covering slightly over 47 acres (190,000 m2), the Quilcene National Fish Hatchery has been operating since 1911. There, the US Fish and Wildlife Service raises coho salmon for on-station release as well as provides coho salmon eggs and fingerlings for tribal programs.

Quilcene experiences an oceanic climate (Köppen climate classification Cfb) and is almost categorised as part of the Csb climate category, receiving slightly more than 30 millimetres (1.2 in)*, the threshold for Cfb inclusion.

All content from Kiddle encyclopedia articles (including the article images and facts) can be freely used under Attribution-ShareAlike license, unless stated otherwise. Cite this article:
Quilcene, Washington Facts for Kids. Kiddle Encyclopedia.