View of Discovery Bay near sunset, looking north with the San Juan Islands in the background

The bay was named by George Vancouver after the Discovery, a ship used in his 1792 expedition of the area. The community at the foot of the bay eventually assumed the same name. 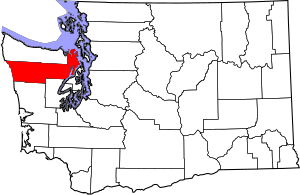 Discovery Bay is located on the Olympic Peninsula of Washington State. The bay enters the Strait of Juan de Fuca between the Miller and Quimper Peninsulas. The bay's mouth is just south of Protection Island, a small federally protected nature preserve. Discovery Bay is 6–7 miles in length, and a bit over a mile wide at its mouth. It is fed by Snow Creek, among other small watercourses.

The community of Discovery Bay, Washington is an area near the intersection of U.S. Route 101 and State Route 20, at the foot of Discovery Bay – roughly midway between the larger communities of Port Townsend and Sequim. It is a mix of residential areas and commercial enterprises, including crabbing, oystering, clamming, timbering, security training and gravel extraction. A few restaurants and stores on US 101 near SR 20 primarily serve drivers and truckers along US 101.

Discovery Bay as seen from Gardiner, Washington, with Diamond Point visible on the left

Discovery Bay is the current name generally associated with the area. Its use for the community, as opposed to the bay itself, is relatively recent. The original communities in the area, primarily mill towns that waxed and waned along with the local timber industry, had different names:

These names often appear on maps and persist in local road names. The mill communities no longer have the population or visibility they enjoyed when the mills were operating, making these hamlets primarily matters of local historical interest. However, changing demographics and rising property values are leading to redevelopment of this area, and breathing new life into older names.

There are several other communities located on Discovery Bay. Proceeding clockwise from the northeast corner:

Native people – the Klallam (locally: S'Klallam) people – have occupied the lands around the Strait of Juan de Fuca for millennia, including locations on Discovery Bay. Most native populations on the Olympic Peninsula were relocated to reservations during the 19th and early 20th centuries, leaving only scattered individuals of native descent still residing on the bay.

The Spanish explorers Manuel Quimper (hence: Quimper Peninsula) and Gonzalo López de Haro in the Princesa Real are the first known Europeans to find and map the bay of Port Discovery. They were sent to explore the Strait of Juan de Fuca by Francisco de Eliza in 1790. The Spanish named the bay Puerto Quadra, after Juan Francisco de la Bodega y Quadra.

In 1792, George Vancouver's exploration of the area provided names for Discovery Bay and Port Discovery. A landing party put ashore along the west shore of the bay near what is now Contractor's Point to fill water barrels from the creek there. Today, a sign alongside of Highway 101 above the site of the landing commemorates the event.

In 1858, the S. L. Mastick Company of San Francisco established the Port Discovery Mill on the western shore of the bay, at what today is called "Mill Point." The old growth timber on the steep hillsides above the mill were felled, slid down to the sawmill, milled into lumber and loaded from the wharf to ships for other ports. A village grew around the mill to house its employees. The peak population of the community, in the late 19th century, was in the hundreds. Port Discovery, Washington remained an important coastal port well into the 20th century, and was visited by many Pacific Ocean vessels.

The U.S. Federal Census of 1860 designated Port Discovery as one of three enumeration districts in Jefferson County. The indigenous people were not counted for this census. The total population was 70 and all but one were males between the ages of 20 and 52 years old. The one female was married to a cook and the only non-white person counted was an African-American male cook. Two thirds of the population were American-born, all of which had migrated west from other states. Of the third that were foreign born, all but one were from England, Ireland, Wales, or Canada. The exception was born in Sweden.

Another major mill community was established at the foot of the bay, where the town of Maynard grew. The Maynard mill continued in operation until the 1970s, and was responsible for the several nearby small communities mentioned above. The abandoned sawmill was a popular sight for tourists, and appears in many nostalgic area photographs and paintings. It deteriorated rapidly during storms in 2005–2006, and as of 2007 had been slated for removal, as part of a habitat restoration effort.

All content from Kiddle encyclopedia articles (including the article images and facts) can be freely used under Attribution-ShareAlike license, unless stated otherwise. Cite this article:
Discovery Bay, Washington Facts for Kids. Kiddle Encyclopedia.