Port Townsend is a city on the Quimper Peninsula in Jefferson County, Washington, United States. The population was 10,148 at the 2020 United States Census. It is the county seat and only incorporated city of Jefferson County. In addition to its natural scenery at the northeast tip of the Olympic Peninsula, the city is known for the many Victorian buildings remaining from its late 19th-century heyday, numerous annual cultural events, and as a maritime center for independent boatbuilders and related industries and crafts. The Port Townsend Historic District is a U.S. National Historic Landmark District. It is also significantly drier than the surrounding region due to being in the rainshadow of the Olympic Mountains, receiving only 19 inches or 480 millimeters of rain per year.

The bay was originally named "Port Townshend" by Captain George Vancouver (for his friend the Marquis of Townshend) in 1792. It was immediately recognized as a good safe harbor, although strong south winds and poor holding ground often make small craft anchorage problematic off the town's waterfront.

The official European-American settlement of the city of the same name took place on April 24, 1851. American Indian tribes located in what is now Jefferson County in the mid-19th century included the Chimakum (or Chemakum), Hoh (a group of the Quileute), Klallam (or Clallam), Quinault and Twana (the Kilcid band — Anglicized: Quilcene).

Port Townsend is also called the "City of Dreams" because of the early speculation that the city would be the largest harbor on the west coast of the United States.

By the late 19th century, Port Townsend was a well-known seaport, very active and banking on the future. Many homes and buildings were built during that time, with most of the architecture ornate Victorian. During this period, in 1888, the Port Townsend Police Department was established. 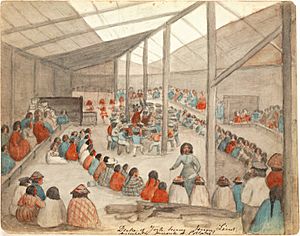 Railroads were built to reach more areas in the 1870-1890s and Port Townsend was to be the northwest extension of the rail lines. Its port was large and frequented by overseas vessels, so shipping of goods and timber from the area was a major part of the economy. Many of the buildings were built on the speculation that Port Townsend would become a booming shipping port and major city. When the depression hit, those plans lost the capital to continue and rail lines ended on the east side of Puget Sound, mainly in Tumwater, Tacoma and Seattle. With the other Puget Sound ports growing in size, Port Townsend saw a rapid decline in population when the Northern Pacific Railroad failed to connect the city to the eastern Puget Sound city of Tacoma. By the late 1890s, the boom was over. Without the railroad to spur economic growth, the town shrank and investors looked elsewhere to make a good return. (The Milwaukee Road built a short spur to the pulpmill and barged cars over from Anacortes.)

Over the decades that followed, Port Townsend maintained its economic stability in a variety of ways, including the development of artillery fortifications at Fort Worden. Many people left the area and many buildings were abandoned. Port Townsend's economy was very weak until the 1920s when a paper mill was built on the edge of the town. The bay is now home to Naval Magazine Indian Island, the US Navy's primary munitions handling dock on the Pacific coast.

Since the 1970s new residents, including many retirees, have moved to town. The waterfront retail district has restaurants, services and tourist destinations. Since 1999, the city has had an annual international film festival in September. Other cultural programming, some at Fort Worden, now a state park, includes a Wooden Boat Festival, writers' conference, and blues and jazz festivals, in addition to music, dance and live theatre performances. The town has 2 independent movie theaters, both upgraded by 2014 to handle digital film.

Because of the speed at which the economy declined in the 1890s and the lack of any industry to replace it, none of the Victorian buildings were torn down or built over in the intervening period. They were essentially preserved for nearly 100 years, when the value of protecting them was appreciated and fostered.

The Port Townsend Historic District, an area including many Victorian-era buildings, was listed on the National Register of Historic Places in 1976. It was designated a National Historic Landmark in 1977. 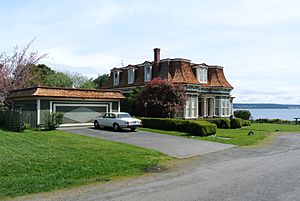 Port Townsend is noted for its Victorian houses and significant historical buildings. The city has more than a dozen large, well-preserved buildings, including the Port Townsend Public Library (a 1913 Carnegie Library), the Federal Building (now commonly known as the city's post office), the Rose Theatre, and the Elks Lodge, which now houses Silverwater Cafe. Fort Worden, now a state park, has retained some of its pre-World War I architecture built when it was a military facility. Buildings have been adapted for other uses, including the publicly available Olympic Youth Hostel, which closed in 2011. The Jefferson County Courthouse is in a Romanesque architectural style, as popularized by Henry Hobson Richardson, with a 125-foot bell tower.

In 1976, the Downtown waterfront and parts of Uptown were designated a Registered Historic District. Later, Fort Worden (now part of Fort Worden State Park) and the City of Port Townsend were designated National Historic Landmarks. The city is one of three Victorian seaports on the National Register of Historic Places. 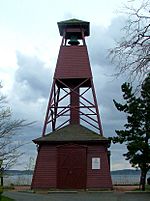 The Bell Tower on the bluff above downtown is one of two known towers of this type in the United States. It was used from 1890 to the 1940s to call volunteer firefighters. It was restored in 2003 by the Jefferson County Historical Society. The second bell tower is located in Helena, Montana, and was also used for fire alarms during the late 19th century. 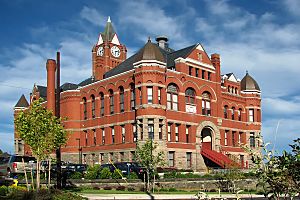 Boating and maritime life are central elements in this port town, with regattas, weekly races and a multitude of recreational opportunities. The marine trades industry is an anchor economic driver for the community, with highly skilled, world-renowned tradespeople. The port is home to many classic wooden boats, and gets visits from owners of others seeking repairs. The Northwest Maritime Center is located in a new facility on the waterfront, which also features a wooden boat shop. The Port Townsend Marine Science Center has facilities on a pier on the Fort Worden State Park beach.

Reflecting the numerous artists in the area, downtown has many galleries and two artists' collectives. The nonprofit Northwind Arts Center (founded in 2002) is located in the 1885 Waterman & Katz Building downtown. There is a monthly Art Walk and a plethora of classes, workshops and training available locally. The history museum is also downtown.

Since 1999, Port Townsend has held an annual international film festival in September. The Rose Theatre is a movie theater downtown that shows contemporary American and foreign films. The Uptown Theater shows family-oriented films, and a nearby drive-in theater is open during the summer months.

Fort Worden State Park is home to a number of cultural organizations and venues. Centrum is a culture and arts organization that hosts a multitude of concerts, festivals and workshops. These include Fiddle Tunes, Blues, Jazz, Voice, Chamber Music and much more. Copper Canyon Press, the poetry press, is located here, as are facilities for Goddard College, Madrona Mindbody Institute, Peninsula College, Port Townsend Aero Museum and the Port Townsend School of Woodworking. There are also two different dance schools for children and adults.

In late October and November 1981, Fort Worden was the central filming location for the 1982 movie An Officer And A Gentleman starring Richard Gere. 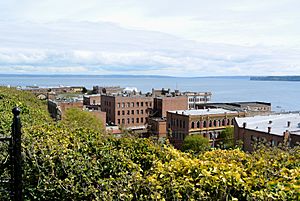 In addition to road links to the south and west, Port Townsend is accessible via ferry from the Washington State Ferry system. Ferries go from the Port Townsend ferry terminal to Coupeville, Washington, on Whidbey Island.

Port Townsend has a moderate Mediterranean climate with damp, chilly (though not severe) winters and warm, dry summers. It lies in the Olympic rain shadow and receives an average of only 18.75 inches (476.2 mm) annual precipitation. However, the environment is not as dry as the mean yearly total would suggest; cool breezes and fog from the Juan de Fuca Strait provide a comfortable level of humidity.

There were 4,544 households, of which 19.2% had children under the age of 18 living with them, 38.9% were married couples living together, 9.4% had a female householder with no husband present, 2.8% had a male householder with no wife present, and 48.9% were non-families. 39.6% of all households were made up of individuals, and 18% had someone living alone who was 65 years of age or older. The average household size was 1.98 and the average family size was 2.60.

Port Townsend is twinned with Ichikawa, Hyōgo, Japan. A group of local students participate in an exchange with this city during the summer.

According to the Washington State Lieutenant Governor's website, Port Townsend also has a sister city relationship with Jalapa, Nicaragua, though the city's website does not reflect this.

Private schools in the city include Olympic Range Carden Academy, and Swan School.

State Route 20 runs southwest from Port Townsend 13 miles (21 km) to U.S. Route 101 at Discovery Bay. Port Angeles is 47 miles (76 km) west of Port Townsend by highway, and Bremerton is 48 miles (77 km) to the south. In addition to road links, the city is accessible via the Washington State Ferries system, which has a route from Port Townsend to Coupeville on Whidbey Island.

All content from Kiddle encyclopedia articles (including the article images and facts) can be freely used under Attribution-ShareAlike license, unless stated otherwise. Cite this article:
Port Townsend, Washington Facts for Kids. Kiddle Encyclopedia.