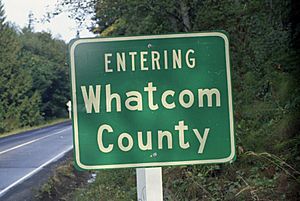 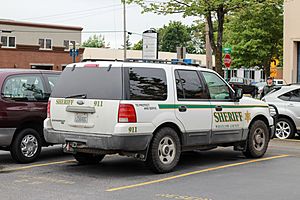 Whatcom County is a county located in the U.S. state of Washington. As of the 2010 census, the population was 201,140. It is bordered by Canada on the north, Okanogan County on the east, Skagit County on the south, and the Strait of Georgia on the west. The county seat and largest city is Bellingham.

The county was created from Island County by the Washington Territorial Legislature on March 9, 1854. It originally included the territory of present-day San Juan and Skagit counties, which were later organized after additional settlement. Its name derives from the Lummi word Xwotʼqom, meaning "noisy water."

Whatcom County's northern border is the Canada–US border with the Canadian province of British Columbia. Adjoining the county on the north are five of metropolitan Vancouver's suburbs, Delta, White Rock, Surrey, Langley, and, in the central Fraser Valley, Abbotsford.

Several shopping malls and other services in Bellingham and elsewhere in the county are geared to cross-border shopping and recreation. The five crossing points are two at Blaine (one at the Peace Arch, located on the Interstate 5 crossing; and the other a commercial and passenger crossing on the Pacific Highway at State Route 543, both to Surrey, British Columbia); as well as at Lynden (SR 539, to Aldergrove); Sumas (SR 9, to Abbotsford); and Point Roberts (Tyee Drive, to Tsawwassen).

A very small part of the county, Point Roberts, about 5 square miles (13 km2), is an extension of the Tsawwassen Peninsula, which is bisected by the Canada–US border along the 49th Parallel. The highest point in the county is the peak of the active volcano Mount Baker at 10,778 feet (3,285 m) above sea level. The lowest points are at sea level along the Pacific Ocean.

All content from Kiddle encyclopedia articles (including the article images and facts) can be freely used under Attribution-ShareAlike license, unless stated otherwise. Cite this article:
Whatcom County, Washington Facts for Kids. Kiddle Encyclopedia.