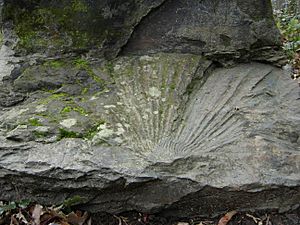 The Chuckanut Mountains (from "Chuckanut", a native word for "Long beach far from a narrow entrance"), or Chuckanuts, are located on the northern Washington state coast of the Salish Sea, just south of Bellingham, Washington. Being a part of the Cascade Range, they are the only place where the Cascades come west down to meet the sea. The Chuckanuts are considered to be a part of the Puget Lowland Forest Ecoregion.

The range contains Larrabee State Park, the first State Park to be designated in Washington (1923). Its mountains include:

The Chuckanut Mountains were formed by the folding of the Chuckanut Formation (which is predominantly made up of layers of 55-million-year-old sandstone, conglomerate, shale, and bituminous and sub-bituminous coal) and the later Huntingdon Formation (predominantly shale and sandstone) on top, as well as an exposed section of pre-Jurassic-age phyllite. The Chuckanuts are well known for their Tertiary Period leaf fossils.

In 1988, an outcrop of metamorphic phyllite, green chert, and milk quartz on Blanchard Mountain was exposed by a construction crew. The outcrop is unique for its unusually large chunks of stilpnomelane.

All content from Kiddle encyclopedia articles (including the article images and facts) can be freely used under Attribution-ShareAlike license, unless stated otherwise. Cite this article:
Chuckanut Mountains Facts for Kids. Kiddle Encyclopedia.