Okanogan County is a county located in the U.S. state of Washington along the Canada–US border. As of the 2020 census, the population was 42,104. The county seat is Okanogan, while the largest city is Omak. Its area is the largest in the state.

About a fifth of the county's residents live in the Greater Omak Area. The county forms a portion of the Okanogan Country. The first county seat was Ruby, which has now been a ghost town for more than 100 years.

Okanogan County was formed out of Stevens County in February 1888. The name derives from the Okanagan language place name ukʷnaqín. The name Okanogan (Okanagan) also refers to a part of southern British Columbia.

Several hundreds of years before Europeans arrived, the area that became Okanogan County was home to numerous indigenous peoples that would eventually become part of three Indian reservations referred to as the Northern Okanogans or Sinkaietk, Tokoratums, Kartars and Konkonelps. They spoke in seven types of Interior Salish languages related to the Puget Sound tribes. The Okanogans experienced a favorable climate, having camped in the winter, hunting bears in the spring, catch fish in the summer and hunt deer in fall. The camps consisted of teepee-like longhouses built with hides and bark. A popular destination for this was the Kettle Falls also situated in Washington where the Columbia River dropped over 20 feet (6.1 m). Meanwhile, women gathered several pieces of nuts, roots and berries.

Due to its remoteness, the area that became Okanogan County was one of the last in Washington settled by white people. It was an early thoroughfare used by prospectors to gain access to other communities, some of which contain gold fields in what is now known as British Columbia, a province in Western Canada. By the 21st century, the region specialized in agriculture, forestry and tourism. Electric producer Grand Coulee Dam was constructed between 1933 and 1942, originally with two power plants, around the Okanogan and Grant counties at the former's southern border. 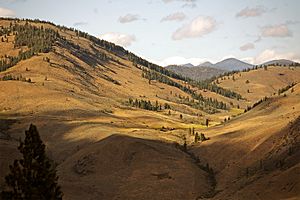 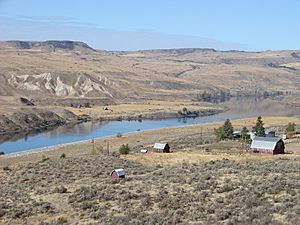 All content from Kiddle encyclopedia articles (including the article images and facts) can be freely used under Attribution-ShareAlike license, unless stated otherwise. Cite this article:
Okanogan County, Washington Facts for Kids. Kiddle Encyclopedia.