Kids Encyclopedia Facts
This page is about the settlement in Okanogan County. For the former train station and mansion in Pacific County, see Loomis station. 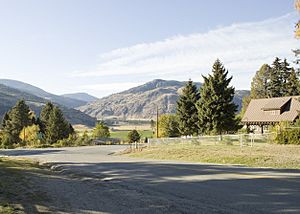 A view from Loomis.

Loomis is a census-designated place (CDP) in Okanogan County, Washington, United States. The population was 159 at the 2010 Census. Its area is 0.85 square miles (2.2 km2), which is all land and no water area.

A post office called Loomis has been in operation since 1889. The community was named after J. A. Loomis, a local storekeeper.

On November 3, 1901, J.M. Haggerty was tarred and feathered in Loomis. He made comments to The Spokesman-Review about the lack of success of the Palmer Mountain Tunnel Company. The comments were resented and a mob was waiting for him when he stepped off the stage. During an impromptu mass meeting, "Suddenly a dozen men grabbed Haggerty, and before half the crowd knew what was happening a bucket of tar and pillows were produced." After half an hour of being paraded through the street covered in tar and feathers, he was released.

This climatic region is typified by large seasonal temperature differences, with warm to hot (and often humid) summers and cold (sometimes severely cold) winters. According to the Köppen Climate Classification system, Loomis has a humid continental climate, abbreviated "Dfb" on climate maps.

All content from Kiddle encyclopedia articles (including the article images and facts) can be freely used under Attribution-ShareAlike license, unless stated otherwise. Cite this article:
Loomis, Washington Facts for Kids. Kiddle Encyclopedia.