Ferry County is a county located on the northern border of the U.S. state of Washington. As of the 2010 census, the population was 7,551, making it the fourth-least populous county in Washington. The county seat and largest city is Republic. The county was created out of Stevens County in February 1899 and is named for Elisha P. Ferry, the state's first governor.

According to the U.S. Census Bureau, the county has a total area of 2,257 square miles (5,850 km2), of which 2,203 square miles (5,710 km2) is land and 54 square miles (140 km2) (2.4%) is water. Most of the county is covered by the rugged Kettle River Range, which extends from the Canada–US border at the north, all the way to its southernmost perimeter bounded by the Columbia River and Lake Roosevelt. Only a narrow north–south strip running the length of the county on the west between the San Poil River and the Okanogan County line is covered by the Okanogan Highland. Except for the town of Republic, the county is very sparsely populated. 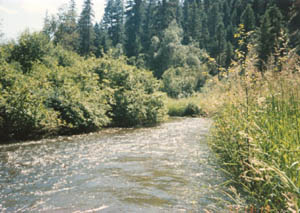 The Sanpoil River flows south to the Columbia

Ferry County reaches to Canada on the north, and to the Columbia River on the east. Its southern portion is in the boundary of the Colville Indian Reservation, controlled by the Colville Confederated Tribes, and its northern portion is largely occupied by Colville National Forest. As a result, only eighteen percent of the total county area is taxable-use ground. The county's economy is largely based on timber-extraction, and mining.

Ferry County's topography and climate make it an ideal recreation destination, so tourism is becoming a significant portion of the county's economy. Washington State Highway 20, designated a National Scenic Highway, crosses the county east–west, and has the state's highest navigable pass (5,575 feet above sea level).

The county seat, Republic, is the site of the Stonerose Interpretive Center and Fossil Site, which exhibits and explains Eocene-era fossils from an ancient lake bed north of Republic.

All content from Kiddle encyclopedia articles (including the article images and facts) can be freely used under Attribution-ShareAlike license, unless stated otherwise. Cite this article:
Ferry County, Washington Facts for Kids. Kiddle Encyclopedia.