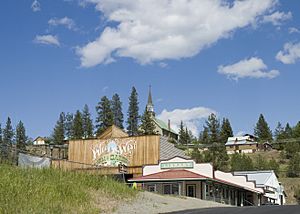 Library and Catholic church in Republic

Republic was founded by gold prospectors in the late 19th century. The Mining District of Eureka was established after gold was found on Eureka Creek. Philip Creasor platted a townsite to be named Eureka. Another strike was made nearby on Granite Creek. The Great Republic claim, found by Thomas Ryan and Philip Creasor on March 5, 1896, was the highest producer of gold. By 1900 the settlement was booming. A post office was established but postal authorities rejected the name Eureka because there was already a town by that name in Clark County, Washington. The citizens then decided to honor the Great Republic mining claim by proposing the name Republic. This name was accepted and the settlement was incorporated as a city on May 22, 1900.

Republic's prominence, initially brought on by the gold rush, started to fade as prospectors and those who supported the mining industry moved away. During the years between 1900 and 1910, the town lost over half its population. Despite this, mining has continued to be an important part of life in Republic, as gold is still mined for in the mountains surrounding the town. Mining is celebrated in the local Prospector's Days, held during the second weekend in June, where locals honor their prospector roots by competing in mining and logging competitions, panning for gold, and watching an old west gun fight. Today, the town of 1,100 is mainly sustained by those people in surrounding farms and ranches, miners who work at the local mine, and tourists looking for a quieter, slower pace of life.

Republic is also the site of the Stonerose Interpretive Center and Fossil Site, famous for the Eocene fossils found in a 49 mya lake bed at the north end of Republic. At the Ferry County Fairgrounds, located three miles (5 km) east of town on State Route 20, is the Ferry County Carousel originally built between 1895 and 1900. Republic has many businesses that line Clark Ave (the main street through town) including Anderson's Grocery, which is over a hundred years old. The Kinross Gold company and Ferry County Memorial Hospital are two of largest employers in the County. 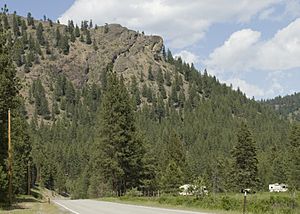 Terrain south of Republic along SR 21

According to the United States Census Bureau, the city has a total area of 1.59 square miles (4.12 km2), all of it land.

Republic is located near the source of the Sanpoil River in a long valley bordered by the Okanagan Highlands to the west and the Kettle mountain range to the east. Curlew Lake, 7 miles (11 km) long (Elev: 2400 ft), provides fishing and boating to summer visitors northeast of Republic. Swan Lake is small mountain lake 14 miles (23 km) to the south of Republic and also serves to be a popular lake for local residents and tourists to visit. Republic is surrounded by the Colville National Forest and to the south is the Colville Indian Reservation.

Republic experiences a humid continental climate (Köppen Dfb) with cold winters, warm summers and fairly even precipitation year-round, with a drying trend in summer, though there is a secondary uptick in rainfall from April thru June, unlike in much of the rest of the state.

There were 493 households of which 23.7% had children under the age of 18 living with them, 33.7% were married couples living together, 13.6% had a female householder with no husband present, 6.1% had a male householder with no wife present, and 46.7% were non-families. 37.7% of all households were made up of individuals and 14.6% had someone living alone who was 65 years of age or older. The average household size was 2.05 and the average family size was 2.68.

There were 411 households out of which 31.4% had children under the age of 18 living with them, 44.0% were married couples living together, 11.7% had a female householder with no husband present, and 40.4% were non-families. 36.5% of all households were made up of individuals and 15.6% had someone living alone who was 65 years of age or older. The average household size was 2.25 and the average family size was 2.96.

All content from Kiddle encyclopedia articles (including the article images and facts) can be freely used under Attribution-ShareAlike license, unless stated otherwise. Cite this article:
Republic, Washington Facts for Kids. Kiddle Encyclopedia.