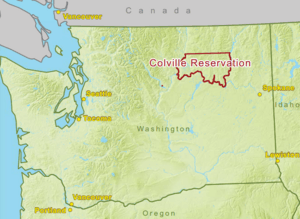 Outline of the Colville Reservation

The Colville Indian Reservation is a Native American reservation in the north-central part of the U.S. state of Washington, inhabited and managed by the Confederated Tribes of the Colville Reservation, which is federally recognized. Established in 1872, the reservation currently consists of 2,825,000 acres (1,143,000 ha). It is located primarily in the southeastern section of Okanogan County and the southern half of Ferry County, but it includes other pieces of trust land in eastern Washington, including in Chelan County, just to the northwest of the city of Chelan. The reservation's name is adapted from that of Fort Colville, which was named by British colonists for Andrew Colville, a London governor of the Hudson's Bay Company.

The Confederated Tribes have 8,700 descendants from 12 aboriginal tribes. The tribes are known in English as: the Colville, Nespelem, Sanpoil, Lakes (after the Arrow Lakes of British Columbia, or Sinixt), Palus, Wenatchee, Chelan, Entiat, Methow, southern Okanagan, Sinkiuse-Columbia, and Nez Perce of Chief Joseph's Band. Some members of the Spokane tribe also settled the Colville reservation after it was established.

Before the influx of British and Americans in the mid-1850s, the ancestors of the 12 aboriginal tribes followed seasonal cycles to gather their food sources. They moved to the rivers for salmon and other fish runs, mountain meadows for berries and deer, or the plateau for roots. Their traditional territories were grouped primarily around waterways, such as the Columbia, San Poil, Nespelem, Okanogan, Snake, and Wallowa rivers.

Many tribal ancestors ranged throughout their aboriginal territories and other areas in the Northwest (including British Columbia, Canada), gathering with other native peoples for traditional activities such as food harvesting, feasting, trading, and celebrations that included sports and gambling. Their lives were tied to the cycles of nature, both spiritually and traditionally.

In the mid-19th century, when European-American settlers began competing for trade with the indigenous native peoples, many tribes began to migrate westward. Trading and its goods became a bigger part of their lives.

For a while, Great Britain and the United States disputed the territory of what the latter called the Oregon Country and the former the Columbia District. Both claimed the territory until they agreed on the Oregon Treaty of 1846, which established United States title south of the 49th Parallel. They did not consider any of the indigenous peoples living in those territories to be citizens or entitled to the lands by their own national claims. However, according to the religions and traditions of the indigenous peoples, this territory had been their home land since the time of creation. A succession of indigenous cultures had occupied this region for more than 10,000 years

President Fillmore signed a bill creating the Washington Territory, and he appointed as Commissioner of Indian Affairs, Major Isaac Stevens of the United States Army Corps of Engineers, to meet with the Indians during his exploration for railroad routes. Stevens wrote a report recommending the creation of "reservations" for the people in the Washington Territory. The report said, "contrary to natural rights and usage," the United States should grant lands that would become reservations to the Indians without purchasing from them.

In 1854 negotiations were conducted, "particularly in the vicinity of white settlements, toward extinguishment of the Indian claims to the lands and the concentration of the tribes and fragments of tribes on a few reservations naturally suited to the requirement of the Indians, and located, so far as practicable, so as not to interfere with the settlement of the country."

During this time, continued American settlement created conflicts and competition for resources with the native tribes. It resulted in the Yakima War, which was fought from 1856 to 1859. Negotiations were unsuccessful until 1865. Superintendent McKenny then commented:

From this report, the necessity of trading with these Indians can scarcely fail to be obvious. They now occupy the best agricultural lands in the whole country and they claim an undisputed right to these lands. White squatters are constantly making claims in their territory and not infrequently invading the actual improvements of the Indians. The state of things cannot but prove disastrous to the peace of the country unless forestalled by a treaty fixing the rights of the Indians and limiting the aggressions of the white man. The fact that a portion of the Indians refused all gratuitous presents shows a determination to hold possession of the country here until the government makes satisfactory overtures to open the way of actual purchase.

That original reservation was west of the Columbia River. Less than three months later, the President issued another executive order on July 2, 1872 moving the reservation further west, to reach from the Columbia River on the west and south, to the Okanogan River on the east, and the Canada–US border to the north. The new reservation was smaller, at 2,852,000 acres (11,540 km2). The Tribes' historic native lands of the Okanogan River, Methow Valley, and other large areas along the Columbia and Pend d'Oreille rivers, along with the Colville Valley, were excluded. The areas removed from the reservation were some of the richest in terms of fertility of land and available natural resources.

Twenty years later, the United States changed government policy, intending to dissolve Indian reservations throughout the United States and make allotments of land to individual households in order to encourage subsistence farming. (This would also "free" land declared excess to tribal needs to be sold to non-Native Americans.) Under the General Allotment Act (Dawes Act) of 1887, the members of the tribes at the Colville reservation were registered and land allotted. An 1892 act of Congress removed the north half of the reservation (now known as the Old North Half) from tribal control, with allotments made to Indians then living on it, and the rest opened up for settlement by others. In 1891, the tribes had entered into an agreement with the federal government to vacate the Old North Half, in exchange for $1.5 million ($1 per acre) and continued hunting and fishing rights, but the 1892 act was based only loosely on that agreement. The government did not complete payments for the land for 14 years. But the tribes retained their hunting and fishing rights to their former reservation land (superior to those of non-members). As was customary then in reservation allotments, individual Indians living on the Old North Half who refused to move to the remaining south half were allotted only 80 acres (32 ha) of land, rather than the 160 acres they would have received within the southern reservation boundaries.

The Old North Half is everything north of Township 34.

The remainder of the communal reservation land was allotted to households, in the same 80-acre amounts, and tribal authority ended, by act of Congress in 1906. The government declared the land not allotted to be excess to tribal needs and opened it for settlement in 1916 by Presidential proclamation. The allotment act was based on an agreement negotiated between the tribes and Indian agent James McLaughlin, signed by 2/3 of the adult male Indians then living on the reservation (of whom there were approximately 600). The Dawes Act enacted a US policy of terminating reservations and tribal government, and did not require any consent by or compensation to Indians. Agreements that Indians did sign were not entirely mutual. They were concerned more with the details of the allotment than the fact of it.

In the face of loss of lands and considerable social distress, President Franklin D. Roosevelt changed federal policy toward the tribes. The Indian Reorganization Act of 1934 reversed the policy of dissolution of reservations and immediately halted the transfer of reservation land to private ownership. Tribes were encouraged to re-establish their tribal governments and establish constitutions based on democratic electoral models.

In 1956, Congress restored tribal control to the Colville Tribes over all land in the south half that was not yet privately owned. In the time since then, the tribe has gradually purchased private land on the reservation and had it placed back into trust status as tribal land. Since the late 20th century, they have received some of the funds for this from the federal government, pursuant to lawsuits, as compensation for the government's mismanagement of the trust lands and insufficient compensation to Indians for former reservation land. In addition, President Barack Obama established a Buy-Back Program.

In 1997 and 1998, the Colville Confederated Tribes commemorated the 125th anniversary of the signing of the Executive Order that created the reservation.

All content from Kiddle encyclopedia articles (including the article images and facts) can be freely used under Attribution-ShareAlike license, unless stated otherwise. Cite this article:
Colville Indian Reservation Facts for Kids. Kiddle Encyclopedia.