Fort Colville was a U. S. Army post in the Washington Territory located 3 miles (4.8 km)* north of current Colville, Washington. During its existence from 1859-1882, it was called "Harney's Depot" and "Colville Depot" during the first two years, and finally "Fort Colville". Brigadier General William S. Harney, commander of the Department of Oregon, opened up the district north of the Snake River to settlers in 1858 and ordered Brevet Major Pinkney Lugenbeel, 9th Infantry Regiment (United States) to establish a military post to restrain the Indians lately hostile to the U. S. Army's Northwest Division and to protect miners who flooded into the area after first reports of gold in the area appeared in Western Washington newspapers in July 1855.

Major Lugenbeel was appointed special agent for the Indians in the region located near Fort Colville. After Lugenbeel departed, the Indian Agent was a civilian. President U. S. Grant and the U. S. Congress to reduce corruption in the handling of Indian Affairs created, in 1869, the Board of Indian Commissioners The Indian Agent for the Colville tribe, Lakes people, Sanpoil tribe, Okanogan people, Spokane people, and early on the Kalispel people moved from the fort to Chewelah, Washington by 1872. 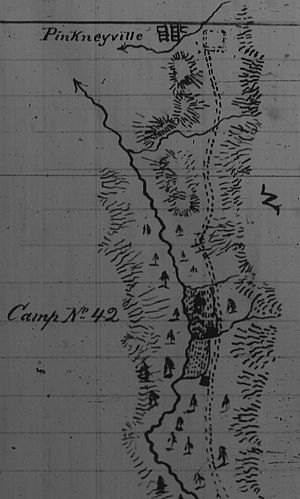 Brevet Major Lugenbeel was directed to build a four-company post able to house 300 men and the U. S. Northwest Boundary Commission personnel. A sawmill owned by R. H. Douglas was two miles from the post at Douglas Falls, but he wanted twice as much as normal for the lumber. Lugenbeel built a sawmill for the fort a half-mile up on Mill Creek to keep costs down.

The U. S. Northwest Boundary Survey personnel arrived at the fort on December 3, 1859, but the buildings assigned to them were not complete. Temperatures were down to −22 °F and they were housed in tents until December 19, 1859. The newly competed buildings were solid and warm and home to the survey personnel for two years as they surveyed and cut the border on the 49th parallel to the Rocky Mountains.

On September 28, 1860, 1st Lieutenant August V. Kautz arrived at Fort Colville with 150 recruits. His journal recorded the route from Coeur d'Alene to the fort along the road built by the U. S. Northwest Boundary Commission above the Spokane River and then along the Fort Walla Walla Fort Colville Military Road.

When the American Civil War started in 1861, officers were ordered to renew their Oath of Allegiance, with four officers eventually resigning to serve with the Confederate States of America. As the Civil War started, Lugenbeel was ordered to take his two companies of regular army to Fort Walla Walla in November 1861, to be replaced by volunteers.

Taking over in late 1861 were C and D Companies, 4th California Infantry Regiment. Locals considered these troops, with some recruited from Alcatrez Prison, as a bad lot including one of the fort's lieutenants who murdered John Burt.

On July 11, 1862, B and C Companies, 1st Regiment Washington Territory Volunteer Infantry, took over the fort.

On May 26, 1865, one company of the 1st Oregon Volunteer Infantry Regiment took over the fort.

On November 3, 1865, regular troops G Company, 14th Infantry Regiment of the U. S. Army, returned to man the fort. On February 18, 1867, soldiers of G Company killed Deputy Sheriff Horace P. Stewart as he tried to break up a beating of his business partner, Jack Shaw, at the saloon owned by both men.

On 6 May 1867, G Company, 23rd Infantry Regiment, took over responsibility for the fort.

In 1875, for the first time cavalry troops were assigned to the fort, when E Company was reinforced by M Company, 1st Cavalry Regiment (United States). Accommodations for horses were added to the fort. In 1876, Indian unrest in the Montana Territory continued to show the need for the fort. In 1877, many soldiers who had been stationed at Fort Colville took part in the pursuit and battles with the Nez Perce.

On October 21, 1880, Fort Spokane was established by the U. S. Army at the junction of the Columbia and Spokane Rivers. Cavalry often stayed at Fort Colville due to a scarcity of hay and grain around Fort Spokane until the summer of 1885.

One of the last actions from the fort was 1st Lt Henry H. Pierce's expedition from Fort Colville to Puget Sound, Washington Territory by way of Lake Chelan and Skagit River August and September 1882.

Nine months after the garrison was withdrawn, Commanding General of the United States Army William Tecumseh Sherman visited Fort Colville in August 1883 in a tour of Army posts in the west. 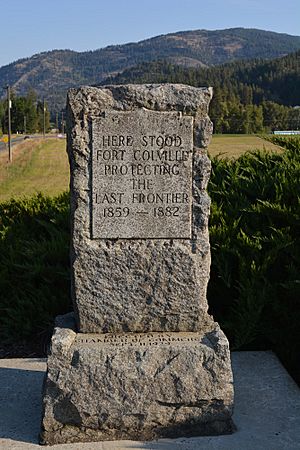 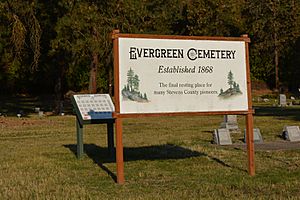 Fort Colville was closed in 1882. On September 11, 1929, Colville civic leaders dedicated a monument to the fort.

The bodies of soldiers who died while serving at the fort were disinterred and moved to the Presidio of San Francisco and the San Francisco National Cemetery. Those that stayed in the area are likely buried at the Evergreen Cemetery established immediately west of the old fort.

All content from Kiddle encyclopedia articles (including the article images and facts) can be freely used under Attribution-ShareAlike license, unless stated otherwise. Cite this article:
Fort Colville Facts for Kids. Kiddle Encyclopedia.