Mullan Road was the first wagon road to cross the Rocky Mountains to the Inland of the Pacific Northwest. It was built by U.S. Army troops under the command of Lt. John Mullan, between the spring of 1859 and summer 1860. It led from Fort Benton, which at the time was in the Dakota Territory, then Idaho Territory from July 1863, and Montana Territory beginning in May 1864, and the navigational head of the Missouri River (and once farthest inland port in the world). The road connected to Fort Walla Walla, Washington Territory, near the Columbia River. The road previewed the route approximately followed of modern-day Interstate 15 and Interstate 90 through present-day Montana, Idaho, and Washington.

Parts of the Mullan Road can still be traveled; one such section is near Washtucna, Washington. 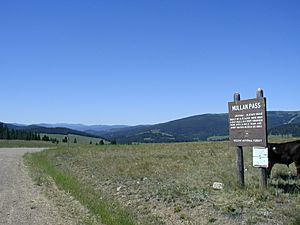 As early as 1852 the US government began to think about building an overland route to the Pacific Ocean to help settle the area with pioneers and eliminate any claims that France, England or Russia had on the disputed territories. Despite the Lewis and Clark expedition, little detail was known about the country. Isaac Ingalls Stevens, a West Point graduate appointed the first governor of the Washington Territory, was ordered to survey a route from the Missouri River to the Columbia River suitable for building a railroad. Stevens assumed the task, but also kept in mind that the route should be suitable for a wagon road.

In the spring of 1853, Congress authorized a U.S. Army expedition, led by Stevens. It was made up of engineers and explorers; they organized near St. Paul, Minnesota. They were to detail the geographical and topographical character of the country. Among them was a small, dark-haired young man, Lieutenant John Mullan; just a year out of West Point, he was anxious to prove his mettle as an engineer.

Mullan was placed in charge of surveying, and later improving, a wagon route (now commonly called the Mullan Road) between Fort Benton (Montana) and Fort Walla Walla (Washington). Lieutenant Mullan, a topographical engineer, began gathering information in 1854. Delayed by the Yakima War which ended in 1858, construction began in 1859 from Fort Walla Walla in what was then Washington Territory. Lieutenant Mullan commanded a workforce of more than 200, including civilian workers, surveyors, engineers, and soldiers who carved a 25-foot-wide (7.6 m) road across the region.

After the difficult project was completed in 1860, floods wiped out substantial stretches of the road. It was re-routed in 1861. Floods again damaged the road, and ultimately, no provision for maintenance was provided.

Although the road was never heavily used by the military, it was an important conduit for civilian passage, which hastened settling of the northwestern United States. In the first year after completion, it was used by an estimated 20,000 people, 6,000 horses and mules, 5,000 cattle and 83 wagons. The discovery of gold in North Central Idaho in 1860 by Capt. E.D. Pierce contributed to this usage, making Lewiston, Washington Territory, the largest town in the Pacific Northwest and the capital of the new Idaho Territory beginning July 4, 1863. The Mullan Road helped Walla Walla become the largest town in Washington Territory by 1870, with a population of 1,394. The road continued to serve as an important route until the completion of the Northern Pacific Railroad in 1883 provided faster and more convenient access to the region.

Route of the Mullan Road

From the origin at Fort Benton, Montana, the Mullan Road proceeded:

All content from Kiddle encyclopedia articles (including the article images and facts) can be freely used under Attribution-ShareAlike license, unless stated otherwise. Cite this article:
Mullan Road Facts for Kids. Kiddle Encyclopedia.