Walla Walla is the largest city in and the county seat of Walla Walla County, Washington, United States.

Recorded history in this state begins with the establishment of Fort Nez Perce in 1818 by the North West Company to trade with the Walla Walla people and other local Native American groups. At the time, the term "Nez Perce" was used more broadly than today, and included the Walla Walla in its scope in English usage. Fort Nez Perce had its name shift to Fort Walla Walla. It was located significantly west of the present city.

On September 1, 1836, Marcus Whitman arrived with his wife Narcissa Whitman. Here they established the Whitman Mission in an unsuccessful attempt to convert the local Walla Walla tribe to Christianity. Following a disease epidemic, both were killed by the Cayuse who believed that the missionaries were poisoning the native peoples. Whitman College was established in their honor.

The original North West Company and later Hudson's Bay Company Fort Nez Percés fur trading outpost, became a major stopping point for migrants moving west to Oregon Country. The fort has been restored with many of the original buildings preserved. The current Fort Walla Walla contains these buildings, albeit in a different location from the original, as well as a museum about the early settlers' lives.

The origins of Walla Walla at its present site begin with the establishment of Fort Walla Walla by the United States Army here in 1856. The Walla Walla River, where it adjoins the Columbia River, was the starting point for the Mullan Road, constructed between 1859 and 1860 by US Army Lieut. John Mullan, connecting the head of navigation on the Columbia at Walla Walla (i.e., the west coast of the United States) with the head of navigation on the Missouri-Mississippi (that is, the east and gulf coasts of the U.S.) at Fort Benton, Montana.

Walla Walla was incorporated on January 11, 1862. As a result of a gold rush in Idaho, during this decade the city became the largest community in the territory of Washington, at one point slated to be the new state's capital. Following this period of rapid growth, agriculture became the city's primary industry. 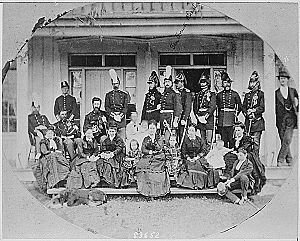 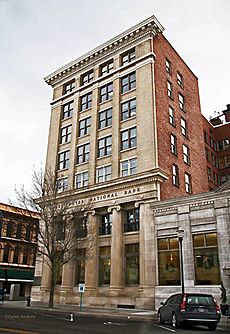 In 1846, the Catholic Church established the Diocese of Walla Walla, with Augustin-Magloire Blanchet as its bishop. (The Latin adjective, not the noun, used by the Roman Curia to refer to Walla Walla, is Valle-Valliensis.) Blanchet arrived on September 5 of that year, but the Whitman massacre of November 29, 1847, led to an uneasy relationship between him, the native Cayuse people, and the United States government, as a result of which he left for St. Paul in the Willamette Valley.

In 1850, the see of Walla Walla was abandoned and its territory assigned to the new Diocese of Nesqually (later spelled "Nisqually"), with Blanchet as its bishop and its episcopal see in Vancouver.

In 1971, the diocese was nominally restored as Titular bishopric of the lowest (Episcopal) rank, and since had six, mostly consecutive incumbents:

Tourists to Walla Walla are often told that locals call it "the town so nice they named it twice". It is a very nice town, however, very few locals actually use this slogan. Walla Walla is a Native American name that means "Place of Many Waters". The original name of the town was Steptoeville named after Colonel Edward Steptoe. In 1855 the name was changed to Waiilatpu, and then by 1859 had been changed again, this time to the name it holds today.

Walla Walla is also located in the Walla Walla Valley, with the rolling Palouse hills and the Blue Mountains to the east of town. Various creeks meander through town before combining to become the Walla Walla River, which drains into the Columbia River about 30 miles (48 km) west of town. The city lies in the rain shadow of the Cascade Mountains, so annual precipitation is fairly low.

Walla Walla has a hot-summer Mediterranean climate according to the Köppen climate classification system (Köppen Csa). It is one of the northernmost locations in North America to qualify as having such a climate. In contrast to most other locations having this climate type in North America, Walla Walla can experience fairly cold winter conditions.

There were 10,596 households of which 30.6% had children under the age of 18 living with them, 46.4% were married couples living together, 11.0% had a female householder with no husband present, and 38.4% were other forms of households. 31.9% of all households were made up of individuals and 15.1% had someone living alone who was 65 years of age or older. The average household size was 2.44 and the average family size was 3.08.

The Walla Walla Valley boasts a number of fine and performing arts organizations and venues.

Baker Boyer Bank, the oldest bank in the state of Washington, was founded in Walla Walla in 1869.

Walla Walla is famous for its sweet onions. There are more than 100 wineries in or near Walla Walla.

In 1972, Walla Walla established a sister city relationship with Sasayama, Japan. The two cities have since named roads after their counterpart sister city. Walla Walla also hosted exchange students from Sasayama since 1994 for a two-week home stay experience. One year high school student exchanges between the cities have occurred several times in the past. Cultural/art exchanges involving music, dance, and various art mediums have also occurred. Walla Walla Sister City Committee has been recipient of the Washington State Sister City Association Peace Prize in 2011 and 2014 for their involvement of promoting peace, cultural understanding and friendship.

All content from Kiddle encyclopedia articles (including the article images and facts) can be freely used under Attribution-ShareAlike license, unless stated otherwise. Cite this article:
Walla Walla, Washington Facts for Kids. Kiddle Encyclopedia.