Fort Benton is a city in and the county seat of Chouteau County, Montana, United States. Established in 1846, a full generation before the U.S. Civil War, Fort Benton is one of the oldest settlements in the American West; in contrast, many other places—including large cities today—were settled in the late 1860s, 1870s, or 1880s. The city's waterfront area, the most important aspect of its 19th-century growth, was designated the Fort Benton Historic District, a National Historic Landmark, in 1961.

Established by European-Americans Auguste Chouteau and Pierre Chouteau, Jr. of St. Louis in 1846 as the last fur trading post on the Upper Missouri River, the fort became an important economic center. For 30 years, the port attracted steamboats carrying goods, merchants, gold miners and settlers, coming from New Orleans, Memphis, St. Louis, Hannibal, Bismarck, Kansas City, etc. As the terminus for the 642-mile-long Mullan Road, completed by the US Army in 1860, and at the head of navigation of the Missouri River, Fort Benton was part of the overland link between trade on the Missouri and the Columbia River, at Fort Walla Walla, Washington. Twenty thousand migrants used the road in the first year to travel to the Northwest. It became an important route for miners from both directions going into the interior of Idaho, and north to Canada. Steamboat travel to Fort Benton from St. Louis, Missouri helped broadly fuel the development of the American West between 1860 and 1890, when it was supplanted by railroad transport. The river was an important route for miners to the newly discovered gold fields of southern Montana at what became Bannack and Virginia City beginning in 1862, and Helena, beginning in 1865.

With the decline of the fur trade, the American Fur Company sold the fort to the US Army in 1865, which named it for Senator Thomas Hart Benton of Missouri. A town had grown up around it that surpassed the military presence. Besides being one of the most important ports on the Missouri-Mississippi river system, Fort Benton was once the "World's Innermost Port". Its importance in trade was superseded by the construction of transcontinental railroads in the late 19th century. In 1867 Fort Benton was the site where Union General Thomas Francis Meagher, then acting governor of Montana Territory, fell overboard from his steamboat and drowned in the river; his body was never recovered. On July 5, 1988 the Fort Benton area was struck by an F3 tornado that injured 2 people. 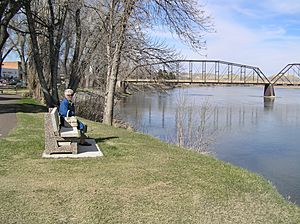 The Missouri River as seen from near the Grand Union Hotel, Fort Benton, Montana

According to the United States Census Bureau, the city has a total area of 2.07 square miles (5.36 km2), all of it land.

The community sits in a narrow river valley on the west bank of the Missouri River and is in a geographic area known as the Golden Triangle (one of several dozen folk regions of Montana) due to the strength of the wheat industry of the region. For example, in 2007, Chouteau County was one of two counties in the United States with the highest wheat production. The long summer days (due to being at almost 48 degrees N latitude) and fertile soil of the area (due in part to ash deposits from the Elkhorn Volcanics to the south) leads to exceptionally "hard" wheat (high protein content) thriving in the area.

There were 686 households of which 20.8% had children under the age of 18 living with them, 48.3% were married couples living together, 7.6% had a female householder with no husband present, 4.2% had a male householder with no wife present, and 39.9% were non-families. 37.0% of all households were made up of individuals and 18.6% had someone living alone who was 65 years of age or older. The average household size was 2.08 and the average family size was 2.67. 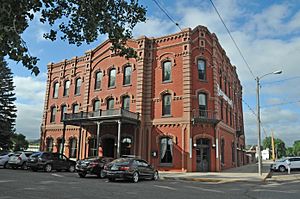 There were 636 households out of which 30.7% had children under the age of 18 living with them, 54.4% were married couples living together, 9.3% had a female householder with no husband present, and 33.5% were non-families. 31.0% of all households were made up of individuals and 14.5% had someone living alone who was 65 years of age or older. The average household size was 2.34 and the average family size was 2.93.

All content from Kiddle encyclopedia articles (including the article images and facts) can be freely used under Attribution-ShareAlike license, unless stated otherwise. Cite this article:
Fort Benton, Montana Facts for Kids. Kiddle Encyclopedia.