Virginia City is a town in and the county seat of Madison County, Montana, United States. In 1961 the town and the surrounding area were designated a National Historic Landmark District, the Virginia City Historic District. The population was 190 at the 2010 census. 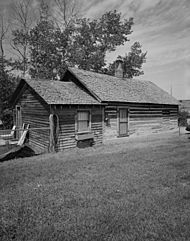 In May 1863, a group of prospectors was headed toward the Yellowstone River and instead came upon a party of the Crow tribe and was forced to return to Bannack. On May 26, 1863, Bill Fairweather and Henry Edgar discovered gold near Alder Creek. The prospectors could not keep the site a secret and were followed on their return to the gold bearing site. A mining district was set up in order to formulate rules about individual gold claims. On June 16, 1863 under the name of "Verina" the township was formed a mile south of the gold fields. The name was intended to honor Varina Howell Davis, the first and only First Lady of the Confederate States of America during the American Civil War. Verina, although in Union territory, was founded by men whose loyalties were thoroughly Confederate. Upon registration of the name, a Connecticut judge, G. G. Bissell, objected to their choice and recorded it as Virginia City.

Within weeks Virginia City was a boomtown of thousands of prospectors and fortune seekers in the midst of a gold rush. The remote region of the Idaho Territory was without law enforcement or justice system with the exception of miners' courts. In late 1863, the great wealth in the region, lack of a justice system and the insecure means of travel gave rise to serious criminal activity, especially robbery and murder along the trails and roads of the region. Road agents as they became known were ultimately responsible for up to 100 deaths in the region in 1863 and 1864. This resulted in the formation of the Vigilance committee of Alder Gulch and the infamous Montana Vigilantes. Up to 15 road agents were hanged by the vigilantes in December 1863 and January 1864, including the sheriff of Bannack, Montana and alleged leader of the road agent gang, Henry Plummer.

The Montana Territory was organized out of the existing Idaho Territory by Act of Congress and signed into law by President Abraham Lincoln on May 26, 1864. Although Bannack was the first territorial capital, the territorial legislature moved the capital to Virginia City on February 7, 1865. It remained the capital until April 19, 1875 when it moved to Helena, Montana. Thomas Dimsdale began publication of Montana's first newspaper, the Montana Post, in Virginia City on August 27, 1864. Montana's first public school was established in Virginia City in March 1866. 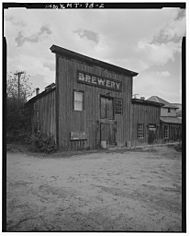 In the 1940s, Charles and Sue Bovey began buying the town, putting much needed maintenance into failing structures. The ghost town of Virginia City began to be restored for tourism in the 1950s. Most of the city is now owned by the state government and is a National Historic Landmark operated as an open-air museum. Of the nearly three hundred structures in town, almost half were built prior to 1900. Buildings in their original condition with Old West period displays and information plaques stand next to thoroughly modern diners and other amenities.

The Historic District of Virginia City and Nevada City is currently operated by the Montana Historic Commission and is the top state-owned tourist attraction in Montana. The Commission operates gold panning, a historic hotel, and the longest continuously operating live summer theater company in the western United States.

Virginia City also has a Boothill Cemetery. There is also the 2 ft 6 in (762 mm) narrow gauge Alder Gulch Short Line Railroad, which transports passengers by rail to the nearby ghost town of Nevada City, Montana, and back.

According to the United States Census Bureau, the town has a total area of 0.95 square miles (2.46 km2), all of it land.

According to the Köppen Climate Classification system, Virginia City has a semi-arid climate, abbreviated "BSk" on climate maps.

There were 102 households of which 17.6% had children under the age of 18 living with them, 40.2% were married couples living together, 9.8% had a female householder with no husband present, 3.9% had a male householder with no wife present, and 46.1% were non-families. 42.2% of all households were made up of individuals and 11.8% had someone living alone who was 65 years of age or older. The average household size was 1.86 and the average family size was 2.49.

There were 72 households out of which 18.1% had children under the age of 18 living with them, 40.3% were married couples living together, 1.4% had a female householder with no husband present, and 54.2% were non-families. 47.2% of all households were made up of individuals and 15.3% had someone living alone who was 65 years of age or older. The average household size was 1.81 and the average family size was 2.52.

All content from Kiddle encyclopedia articles (including the article images and facts) can be freely used under Attribution-ShareAlike license, unless stated otherwise. Cite this article:
Virginia City, Montana Facts for Kids. Kiddle Encyclopedia.