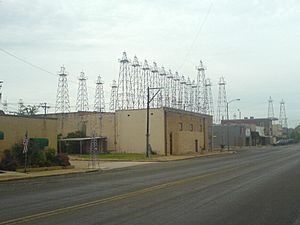 A boomtown is a place that has very quick population and economic growth. Boomtowns are usually mining towns where an important mineral resource such as gold, silver, or petroleum has been found. It can happen, for example in a gold rush. Gold rush towns usually shrink and disappear after the gold is dug up. They become ghost towns.

The word can also be used for places that grow for other reasons. This can be the town being near a major city, in a nice climate or near a popular attraction. 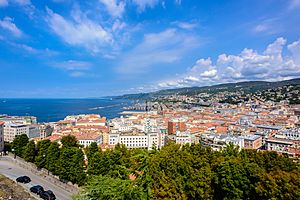 Trieste, from the opening of the free port, a boomtown of Central Europe in the northernmost part of the Adriatic. 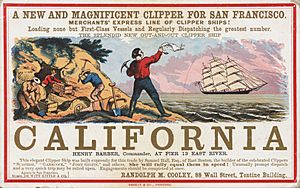 California attracted tens of thousands of gold prospectors during the Gold Rush of 1849.

Early boomtowns, such as Leeds, Liverpool, and Manchester, experienced a dramatic surge in population and economic activity during the Industrial Revolution at the turn of the 19th century. In pre-industrial England these towns had been relative backwaters, compared to the more important market towns of Bristol, Norwich, and York, but they soon became major urban and industrial centres. Although these boomtowns did not directly owe their sudden growth to the discovery of a local natural resource, the factories were set up there to take advantage of the excellent Midlands infrastructure and the availability of large seams of cheap coal for fuel.

Another typical boom town is Trieste in Italy. In the 19th century the free port and the opening of the Suez Canal began an extremely strong economic development. At the beginning of the First World War, the former fishing village with a deep-water port, which used to be small but geographically centrally located, was the third largest city of the Habsburg monarchy. Due to the many new borders, World War II and the Cold War, the city was completely isolated, abandoned and shrunk for a long time. The handling of goods in the port and property prices fell sharply. Only when the surrounding countries joined the EU did Trieste return to the economic center of Europe.

In the mid-19th century, boomtowns were based on natural resources began to proliferate as companies and individuals discovered new mining prospects across the world. The California Gold Rush of the Western United States stimulated numerous boomtowns in that period, as settlements seemed to spring up overnight in the river valleys, mountains, and deserts around what was thought to be valuable gold mining country. In the late 19th and early 20th centuries, boomtowns called mill towns would quickly arise due to sudden expansions in the timber industry; they tended to last the decade or so it took to clearcut nearby forests. Modern-day examples of resource-generated boomtowns include Fort McMurray in Canada, as the extraction of nearby oilsands requires a vast number of workers, and Johannesburg in South Africa, based on the gold and diamond trade. 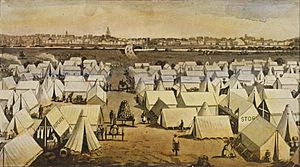 "Canvas Town" – South Melbourne, Victoria. Temporary accommodation for the thousands who poured into Melbourne each week in the early 1850s during the Victorian gold rush.

San Francisco in 1851, during the heyday of the California gold rush.

All content from Kiddle encyclopedia articles (including the article images and facts) can be freely used under Attribution-ShareAlike license, unless stated otherwise. Cite this article:
Boomtown Facts for Kids. Kiddle Encyclopedia.