Idaho City was founded in December 1862 as “Bannock” (sometimes given as “West Bannock”), amidst the Boise Basin gold rush during the Civil War, the largest since the California gold rush a dozen years earlier. Near the confluence of Elk and Mores Creeks, its plentiful water supply allowed it to outgrow the other nearby camps in the basin, such as Placerville, Pioneerville, and Centerville. As its population swelled, the new Idaho Territorial legislature changed the town’s name to “Idaho City,” to avoid confusion with Bannack, in present-day Beaverhead County, the southwestern corner of Montana.

At its peak during the mid-1860s, there were more than 200 businesses in town, including three dozen saloons and two dozen law offices. Its 1864 population of 7,000 made it the largest city in the Northwest, bigger than Portland. Wood was the prime source of both shelter and heat, which caused Idaho City to burn four times: 1865, 1867, 1868, and 1871. Five businesses on Main Street burned again in the early hours of June 5, 2015.

In 1863, St. Joseph’s Catholic Church was established; it was the first Catholic parish in the new Idaho Territory and the church was completed the following year.

During the boom, the greater Boise Basin population numbered in the tens of thousands, but most departed the mountains once mining declined. Idaho City’s population fell below 900 by 1870 and was down to 104 by 1920. The modern economy relies mainly on hunting and fishing tourism, and visits to the many historic sites, including the Boot Hill Cemetery. Outside of town, the mining tailings of the era are ubiquitous.

Four thousand Chinese lived in the Idaho Territory from 1869 to 1875. Like many Chinese immigrants, they came to “Gold Mountain” to work as miners, or found work as laundrymen and cooks. The store of Pon Yam, a prominent Chinese businessman Pon Yam House from 1867 is one of the only remaining buildings from Idaho City’s Chinese. Although today Chinese are rarely seen except as tourists, the 1870 census reported at 1,751 Chinese who were nearly half of city residents. Annie Lee was one legendary Idaho city woman who like Polly Bemis, escaped enslavement from the “world’s oldest profession”. She escaped from a member of the Yeong Wo Company in the 1870s to Boise to marry her lover, another Chinese man. Charged by her owner with grand larceny, she told a judge that she wanted to stay in Boise City. The judge subsequently granted her freedom.

According to the United States Census Bureau, the city has a total area of 0.67 square miles (1.74 km2), all of it land.

Idaho City experiences a fairly typical Inland Northwest continental Mediterranean climate (Köppen Dsb) with cold, snowy winters and warm, dry summers, typified throughout by large diurnal temperature variations. The town averages 217 nights below 32 °F (0 °C) per year – as many as Fairbanks, Alaska and 100 more than nearby Boise – 24 days which fail to top freezing, and 14 nights that fall below 0 °F (−17.8 °C). Owing to its more exposed location and slightly higher altitude, it is not only noticeably cooler but also much wetter than Boise, receiving twice as much precipitation and almost four times as much snowfall, which averages 71.6 inches (181.9 cm) with a maximum daily snow cover of 46 inches (1.2 m) in January 1982. 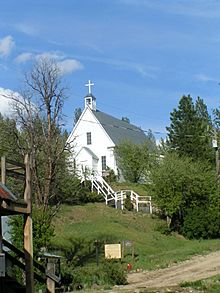 There were 216 households of which 28.2% had children under the age of 18 living with them, 43.5% were married couples living together, 9.7% had a female householder with no husband present, 4.2% had a male householder with no wife present, and 42.6% were non-families. 37.0% of all households were made up of individuals and 11.1% had someone living alone who was 65 years of age or older. The average household size was 2.25 and the average family size was 2.97.

There were 191 households out of which 34.6% had children under the age of 18 living with them, 46.1% were married couples living together, 12.0% had a female householder with no husband present, and 37.2% were non-families. 30.9% of all households were made up of individuals and 5.8% had someone living alone who was 65 years of age or older. The average household size was 2.38 and the average family size was 3.00.

Idaho City is currently in Idaho's 1st congressional district and has been represented by Republican Raúl Labrador since 2010. Prior to the 2010 election, the seat was held by Democrat Walt Minnick.

The city is served by State Highway 21, a two-lane undivided highway that connects to Boise to the southwest. To the northeast, it continues on to Lowman and Stanley. The highway travels through the Boise National Forest and is designated as the “Ponderosa Pine Scenic Byway.” The route ascends to Banner Creek Summit at 7,056 feet (2,151 m) and later enters the Sawtooth National Recreation Area about 12 miles (19 km) northwest of Stanley.

All content from Kiddle encyclopedia articles (including the article images and facts) can be freely used under Attribution-ShareAlike license, unless stated otherwise. Cite this article:
Idaho City, Idaho Facts for Kids. Kiddle Encyclopedia.