The City of Central, commonly known as Central City, is the Home Rule Municipality in Gilpin and Clear Creek counties that is the county seat and the most populous municipality of Gilpin County, Colorado, United States. The city population was 663 at the 2010 United States Census. The city is a historic mining settlement founded in 1859 during the Pike's Peak Gold Rush and came to be known as the "Richest Square Mile on Earth". Central City and the adjacent city of Black Hawk form the federally designated Central City/Black Hawk Historic District. The city is now a part of the Denver-Aurora-Lakewood, CO Metropolitan Statistical Area. 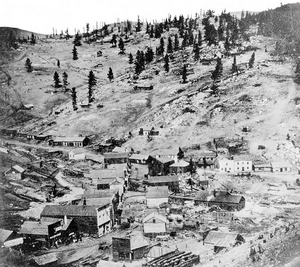 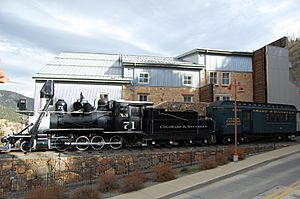 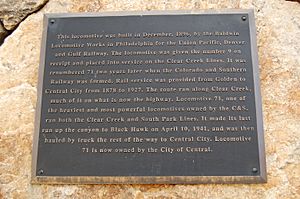 The plaque with historical information about C&S #71

On May 6, 1859, during the Pike's Peak Gold Rush, John H. Gregory found a gold-bearing vein (the Gregory Lode) in Gregory Gulch between Black Hawk and Central City. Within two months many other veins were discovered, including the Bates, Gunnell, Kansas, and Burroughs. By 1860, as many as 10,000 prospectors had flocked to the town, then known as Mountain City, and surrounding prospects, but most soon left, many returning east. The 1900 census showed 3,114 people.

The year 1863 brought the first attempt by hard rock miners to form a hard rock miners' union. Of 125 miners signing a union resolution in Central City, about fifty broke windows and doors at the Bob Tail mine, forcing other workers out. After a night of shooting and fighting, the union effort among Central City miners failed.

Many Chinese lived in Central City during the early days working the placer deposits of Gregory Gulch. They were forbidden work in the underground mines. Most of them are believed to have returned to China after making their stake.

The frontier gambler Poker Alice lived for a time in Central City and several other Colorado mining communities.

Gold mining in the Central City district decreased rapidly between 1900 and 1920, as the veins were exhausted. Mining revived in the early 1930s in response to the increase in the price of gold from $20 to $35 per ounce, but then virtually shut down during World War II when gold mining was declared nonessential to the war effort. The district was enlivened in the 1950s by efforts to locate uranium deposits, but these proved unsuccessful.

The population of Central City and its sister city Black Hawk fell to a few hundred by the 1950s. Casino gambling was introduced in both towns in the early 1990s, but had more success in Black Hawk (which has 18 casinos) than in Central City (which has 6 casinos), partly because the main road to Central City passed through Black Hawk, tempting gamblers to stop in Black Hawk instead. In an effort to compete, Central City completed a four-lane, 8.4-mile (13.5 km) parkway from Interstate 70 to Central City, without going through Black Hawk. The highway was completed in 2004, but Black Hawk, which prior to the introduction of gambling was much smaller than Central City, continues to generate more than seven times the gambling revenue that Central City does. To compete, Central City has recently eliminated height restrictions for building on undeveloped land. Buildings were previously limited to heights of 53 feet (16 m), so as not to overshadow the town's historic buildings.

Tax from the gambling revenue provides funding for the State Historical Fund, administered by the Colorado Office of Archaeology and Historic Preservation.

Central City is located in southern Gilpin County. The city limits extend south along the Central City Parkway into Clear Creek County, as far as Interstate 70. The city is bordered by Black Hawk to the east and Idaho Springs to the south.

According to the United States Census Bureau, the city has a total area of 2.4 square miles (6.3 km2). None of the area is covered with water.

There were 261 households out of which 17.6% had children under the age of 18 living with them, 26.8% were married couples living together, 8.8% had a female householder with no husband present, and 61.3% were non-families. 43.3% of all households were made up of individuals and 6.1% had someone living alone who was 65 years of age or older. The average household size was 1.97 and the average family size was 2.76.

All content from Kiddle encyclopedia articles (including the article images and facts) can be freely used under Attribution-ShareAlike license, unless stated otherwise. Cite this article:
Central City, Colorado Facts for Kids. Kiddle Encyclopedia.