Clear Creek County is one of the 64 counties of the U.S. state of Colorado. As of the 2010 census, the population was 9,088. The county seat is Georgetown.

Clear Creek County was one of the original 17 counties created by the Colorado legislature on 1 November 1861, and is one of only two counties (along with Gilpin) to have persisted with its original boundaries unchanged. It was named after Clear Creek, which runs down from the continental divide through the county. Idaho Springs was originally designated the county seat, but the county government was moved to Georgetown in 1867. 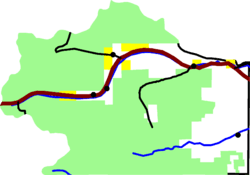 All content from Kiddle encyclopedia articles (including the article images and facts) can be freely used under Attribution-ShareAlike license, unless stated otherwise. Cite this article:
Clear Creek County, Colorado Facts for Kids. Kiddle Encyclopedia.