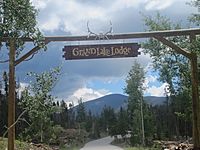 Grand County is one of the 64 counties in the U.S. state of Colorado. As of the 2010 census, the population was 14,843. The county seat is Hot Sulphur Springs.

When Grand County was created February 2, 1874 it was carved out of Summit County and contained land to the western and northern borders of the state, which is now in present-day Moffat County and Routt County. It was named after Grand Lake and the Grand River, an old name for the upper Colorado River, which has its headwaters in the county. On January 29, 1877 Routt County was created and Grand County shrunk down to its current western boundary. When valuable minerals were found in North Park, Grand County claimed the area as part of its county, a claim Larimer County also held. It took a decision by the Colorado Supreme Court in 1886 to declare North Park part of Larimer County, setting Grand County's northern boundary. 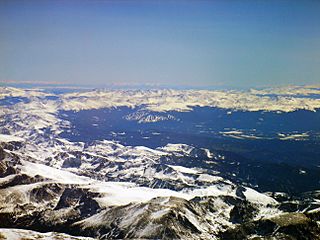 The Fraser Valley in eastern Grand County is a key tourist area.

All content from Kiddle encyclopedia articles (including the article images and facts) can be freely used under Attribution-ShareAlike license, unless stated otherwise. Cite this article:
Grand County, Colorado Facts for Kids. Kiddle Encyclopedia.