Grand Lake is Colorado's largest and deepest natural lake. It is located in the headwaters of the Colorado River in Grand County, Colorado. On its north shore is located the historic and eponymous town of Grand Lake. The lake was formed during the Pinedale glaciation, which occurred from 30000 BP (before present) to 10000 BP. The glacial terminal moraine created a natural dam. Natural tributaries to the lake are the North Inlet and East Inlet, both of which flow out of Rocky Mountain National Park, which surrounds the lake on three sides. Grand Lake is located 1 mile from the Park's western entrance. Grand Lake was named Spirit Lake by the Ute Tribe because they believed the lake's cold waters to be the dwelling place of departed souls.

As part of the Colorado-Big Thompson Project, Grand Lake forms a continuous body of water with the man-made reservoir Shadow Mountain Lake, which under natural conditions then flows into another man-made reservoir, Lake Granby. The elevation of Grand Lake is maintained between 8,367 feet (2,550 meters) and 8,366 feet (2,549.8 meters). When the Colorado-Big Thompson (C-BT) project is diverting water to northeastern Colorado, water collected in Lake Granby can be pumped back into Shadow Mountain where it flows backward into Grand Lake, then under Rocky Mountain National Park and the Continental Divide via the Alva B. Adams Tunnel to the Big Thompson River on the eastern slope of the Rocky Mountains. From there, the water flows into the South Platte River and is used for agriculture, municipal, and industrial purposes. Diverted C-BT water provides hydroelectric power to five power stations on the eastern slope of the Colorado Rockies. 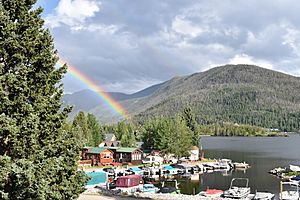 All content from Kiddle encyclopedia articles (including the article images and facts) can be freely used under Attribution-ShareAlike license, unless stated otherwise. Cite this article:
Grand Lake (Colorado) Facts for Kids. Kiddle Encyclopedia.