The Big Thompson River is a tributary of the South Platte River, approximately 78 miles (123 km) long, in the U.S. state of Colorado. It originates in Forest Canyon into Lake Estes, in Estes Park, CO. It includes four crossings/bridges which are listed on the U.S. National Register of Historic Places.

Course of the river 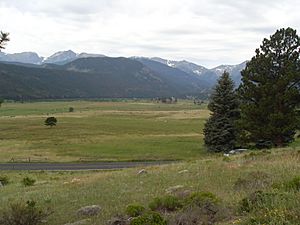 From Lake Estes, the river descends 1/2 mile (800 m) in elevation through the mountains in the spectacular 25 mi (40 km) Big Thompson Canyon, emerging from the foothills west of Loveland. It flows eastward, south of Loveland across the plains into Weld County and joins the South Platte approximately 5 mi (8 km) south of Greeley. It receives the Little Thompson River approximately four mi (6 km) upstream from its mouth.

Water resources in the Big Thompson River are managed by the Northern Colorado Water Conservancy District as part of the Colorado-Big Thompson Project. 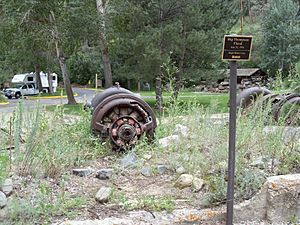 Sign in the Viestenz-Smith Park, demonstrating the maximum height of the flood

On July 31, 1976, during the celebration of Colorado's centennial, the Big Thompson Canyon was the site of a devastating flash flood that swept down the steep and narrow canyon, claiming the lives of 143 people, 5 of whom were never found. This flood was triggered by a nearly stationary thunderstorm near the upper section of the canyon that dumped 300 millimeters (12 inches) of rain in less than 4 hours (more than 3/4 of the average annual rainfall for the area). Little rain fell over the lower section of the canyon, where many of the victims were. 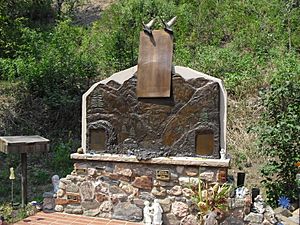 Memorial to the lives lost in the 1976 Big Thompson Flood located in the town of Drake.

In 2008, a man who was thought to have died in the flood was found to be alive and living in Oklahoma. Daryle Johnson and his family had rented a cabin east of Estes Park, but left without telling anyone on the morning of July 31. A woman who was researching the flood's victims discovered he was still alive. 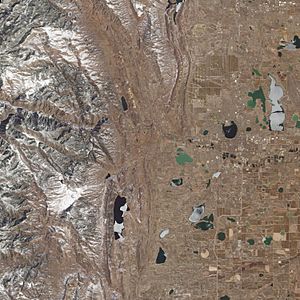 This natural-colour image of the lower reaches of Big Thompson Canyon illustrates two of the three natural factors that contributed to the flood's severity: steep terrain and sparse vegetation

The canyon was just one of the many areas along the Front Range that were devastated in the September 2013 flood. While not as intense as the 1976 flood, the storms that caused the flooding in 2013 still sent enough water down the canyon to wash out the highway in many places. The flood also damaged the US Bureau of Reclamation's Dille Diversion Dam. The biggest infrastructure casualty, however, was the City of Loveland's hydroelectric plant (rebuilt after the 1976 flood); the Idylwilde Reservoir was completely filled with silt and rocks, the Idylwilde Dam broke free of the bedrock, and the hydroelectric plant in the Viestenz-Smith Mountain Park was filled with water and silt. The dam was in the process of being relicensed with the FERC, but it was instead demolished, the dam material and contents of the reservoir being used as fill for highway repairs. The park has since been redone to accommodate the post-flood river channel and to harden it against potential future floods. The city also rebuilt its municipal electric distribution line into the canyon to replace the original 1925 transmission line and remove obsolete distribution equipment.

All content from Kiddle encyclopedia articles (including the article images and facts) can be freely used under Attribution-ShareAlike license, unless stated otherwise. Cite this article:
Big Thompson River Facts for Kids. Kiddle Encyclopedia.