The City of Loveland is the Home Rule Municipality that is the second most populous municipality in Larimer County, Colorado, United States. Loveland is situated 46 miles (74 km) north of the Colorado State Capitol in Denver. Loveland is the 14th most populous city in Colorado. The United States Census Bureau estimated that in 2014 the population of the city was 72,651. The city forms part of the Fort Collins-Loveland Metropolitan Statistical Area and the Front Range Urban Corridor. The city's public schools are part of the Thompson R2-J School District.

It is south of Fort Collins, its larger neighbor and the county seat of Larimer County. Both cities have expanded steadily toward each other over the last several decades and are considered a single metropolitan area by the U.S. government. The establishment of county-owned open space between the two communities in the 1990s was intended to create a permanent buffer between them. The northern city limits are now contiguous with those of Windsor, which has expanded westward from Weld County across Interstate 25. Loveland has aggressively expanded its incorporated limits eastward to embrace the interchange of Interstate 25 and U.S. Highway 34, and is currently developing the area. In the last decade, the intersection has become a primary commercial hub of northern Colorado, with the construction of shopping centers and the Budweiser Events Center. A new medical center and mall have also been built on the Interstate 25 and U.S. Highway 34 interchange. This area is known as Centerra. The interchange is shared with its smaller neighbor Johnstown, of Weld County.

The city was founded in 1866 along the newly constructed line of the Colorado Central Railroad, near its crossing of the Big Thompson River. It was named in honor of William A.H. Loveland, the president of the Colorado Central Railroad. The city was founded one mile (1.6 km) upstream from the existing small settlement of St. Louis, the buildings of which were moved to the site of Loveland. For the first half of the 20th century the town was dependent on agriculture. The primary crops in the area were sugar beets and sour cherries. In 1901, the Great Western Sugar Company built a factory in Loveland, which remained as a source of employment until its closure in 1985. During the late 1920s the Spring Glade orchard was the largest cherry orchard west of the Mississippi River. At that time the cherry orchards produced more than $1 million worth of cherries per year. A series of droughts, attacks of blight and finally a killer freeze destroyed the industry. By 1960 cherries were no longer farmed. In the late 20th century, the economy diversified with the arrival of manufacturing facilities by Hewlett-Packard, Teledyne, and Hach, a water quality analysis equipment manufacturer. A new medical center has added a substantial amount of employment in that sector as well.

On September 12, 2013 a historic flood affected numerous areas in Colorado. It rained heavily for 4 consecutive days, causing most rivers and creeks to overfill their banks. Estes Park received 8-12 inches of rain, causing Lake Estes to overfill its banks. This prompted a lot of water to be released out of the dam causing the Big Thompson River to swell. The flooding River caused sections of U.S. Highway 34 to collapse. Route 34 is the main highway from Loveland to Estes Park. The Big Thompson caused major flooding in Loveland, and caused numerous road closures because of flood waters. The Loveland/Fort Collins area received about 4 inches, which is relatively less significant compared to the amount of rain other places received. This flood is said to be worse than the Big Thompson Flood of 1976. It also being called a 500-year flood. Five people were killed in the floods from the Cedar Cove neighborhood in the Big Thompson River Canyon.

Loveland Pass, also named after William A.H. Loveland, is not located near the town of Loveland.

Loveland, Colorado has an annual snowfall of 54 inches (137 cm).

There were 19,741 households out of which 35.3% had children under the age of 18 living with them, 57.5% were married couples living together, 9.8% had a female householder with no husband present, and 28.9% were non-families. 23.4% of all households were made up of individuals and 8.8% had someone living alone who was 65 years of age or older. The average household size was 2.55 and the average family size was 3.01. 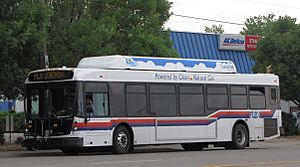 The Fort Collins / Loveland Airport serves corporate and general aviation needs, but does not currently have commercial airline service. The closest commercial/commuter airport is Denver International Airport, 70 miles (110 km) to the south, which is served by nearly twenty airlines. Loveland can be approached from Denver by car via Interstate 25.

U.S. Highway 34 runs East to West into the mountains through Loveland. It becomes Eisenhower Blvd. in the city, dividing it in half. Loveland's two main zip codes (80538 and 80537) are separated by this highway. A Tesla Supercharger was built and operational in the city by the end of December 2016.

The city bus system in Loveland is called COLT—City of Loveland Transit.

Loveland is connected to Fort Collins, Berthoud, and Longmont via the FLEX regional bus route and to Denver via the Bustang interregional express bus. 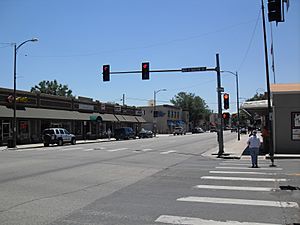 The Ft Collins-Loveland metropolitan area has received numerous awards as a great place to live, by Money Magazine, USA Today, AARP the Magazine, and others. There is a large population of artists in Loveland, which has drawn three foundries, an art museum, and the annual sculpture shows in August. The city is a major business center for northern Colorado.

The city is located in the Colorado Front Range region at the base of the foothills just east of the mouth of Big Thompson River Canyon at the intersection of U.S. Highway 34 and U.S. Highway 287. Longs Peak and other mountains of the Front Range are visible from much of the city. Lake Loveland, an early agricultural reservoir in the irrigation system of the region, is located in the city limits and provides a recreational facility for the city residents.

Because of its location along U.S. 34, at one of the principal access routes to Estes Park and Rocky Mountain National Park, Loveland receives a significant amount of pass-through tourist traffic, especially in the summer months. In addition, the city serves as a "bedroom" community to commuters in many directions: to employment locations in Boulder, Westminster and other parts of the Denver Metropolitan area; and also to the college towns of Fort Collins (CSU), Greeley (UNC), and Boulder, (CU).

Loveland is the home of the Valentine Re-Mailing Program. For decades people from across the world have sent their valentines to Loveland, Colorado, to be hand-stamped with a cachet and verse, and a specially designed postal cancelation. A new verse and stamp are selected each year through a contest held by the Loveland Chamber of Commerce and residents can submit their poems and artwork to be judged. On average, this program re-mails more than 160,000 cards from the United States and more than 110 countries. Loveland's Valentine Re-mailing Program has inspired many other Valentine's Day programs including the Official Loveland Valentine, Miss Loveland Valentine and the Thompson Valley Rotary Heart’s Program. Information on all these programs is available through the With Love From Loveland website. The Loveland Chamber of Commerce and the Loveland Post Office sponsor the Loveland Valentine Re-mailing Program.

Loveland's Valentine Re-mailing Program began in January 1947 by Ted Thompson and Elmer Ivers, the Loveland postmaster after Ivers received about 30 valentines from individuals requesting to have the cards postmarked from Loveland for, "a romantic extra touch." The two thought re-mailing valentines would be an opportunity to advertise Loveland, and the Loveland Chamber of Commerce agreed to promote the service. Thompson designed a cachet with the message, "A Valentine Greeting from Sweetheart Town, Loveland, Colorado," and the image was a heart pierced by an arrow over the Rocky Mountains. The cachet was used twice, then Thompson started the tradition of changing it each year at the request of collectors. Since then, a different verse and design have been used every year. 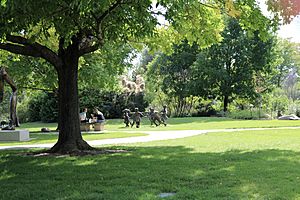 The Sculpture in the Park show, hosted by the Loveland High Plains Arts Council, takes place annually in August and exhibits artwork from artists from the United States and the world.

All content from Kiddle encyclopedia articles (including the article images and facts) can be freely used under Attribution-ShareAlike license, unless stated otherwise. Cite this article:
Loveland, Colorado Facts for Kids. Kiddle Encyclopedia.