Westminster is a Home Rule Municipality in Adams and Jefferson counties in the U.S. state of Colorado. Westminster is a northwest suburb of Denver. The Westminster Municipal Center is located 9 miles (14 km) north-northwest of the Colorado State Capitol. The United States Census Bureau estimates that the city population was 106,114 on April 1, 2010 Census. Westminster is the seventh most populous city in the state of Colorado and the 237th most populous city in the United States. Westminster is a part of the Denver-Aurora-Broomfield, CO Metropolitan Statistical Area and the Denver-Aurora-Boulder Combined Statistical Area. In July 2006, it was ranked as the 24th best place to live in the USA by Money magazine. 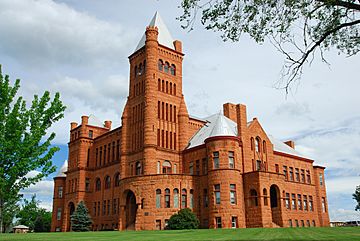 Westminster University, also known as Westminster Castle is listed on the National Register of Historic Places and overlooks the city of Denver.

Gold discovered in the South Platte River Valley in 1858 brought national attention to the area that would become Westminster, Colorado. The promise of fortune and the Land Act of 1862 encouraged many settlers from the east to make Colorado their home instead of heading on to California. Before the settlements came, wildlife like antelope and buffalo made their homes in this area. There is also evidence of Arapaho Indians near the Crown Point (Gregory Hill) area.

After the first permanent white settler, Pleasant DeSpain, built his home in 1870 on 160 acres (near what is now West 76th Avenue and Lowell Street), the area became known as DeSpain Junction and began attracting other settlers including horse breeder Edward Bruce Bowles who was instrumental in constructing the town's train depot in 1881. In 1885, Connecticut real estate developer C. J. Harris arrived in DeSpain Junction and began buying up land. Soon the town was renamed Harris, but was also known as Darell Park.

In 1891, construction began on the Westminster Castle, which can still be seen as of today at West 83rd Avenue and Federal Boulevard. By 1911, the town had incorporated and was renamed one final time to Westminster, in honor of Westminster University.

There were 38,343 households out of which 35.7% had children under the age of 18 living with them, 53.6% were married couples living together, 9.6% had a female householder with no husband present, and 32.1% were non-families. 23.7% of all households were made up of individuals and 4.5% had someone living alone who was 65 years of age or older. The average household size was 2.62 and the average family size was 3.15.

The Denver Regional Transportation District (RTD) provides bus service to Westminster and the rest of the metropolitan area. RTD plans to build commuter rail servicing Westminster as part of the Fastracks project that originate in Denver and travel to Longmont and Boulder respectively. As part of the US 36 Express Lanes Project, a bus rapid transit line was established along the corridor, branded the Flatiron Flyer. The BRT line was completed in 2016, and consists of six stations along US 36, including two in Westminster, Church Ranch Station and Westminster Center Station. The busses travel on managed lanes to increase the efficiency of the service, and offer frequent bus service connecting the Denver metro area with the northwest region's businesses, federal institutions and the University of Colorado–Boulder. Riders also have convenient and frequent access to downtown Boulder and downtown Denver.

Westminster is served by Denver International Airport and nearby Rocky Mountain Metropolitan Airport.

Westminster has an extensive trail network and open space system. The highlight of the trail system is the Big Dry Creek Trail which extends approximately 12 miles (19 km) from the eastern boundary of the city to Standley Lake. Other trails parallel the Farmers' High Line Canal, Walnut Creek, and Little Dry Creek. In addition, the city has preserved large expanses of land in the Standley Lake Regional Park, the Westminster Hills area, and various sites which reflect the city's history. Westminster City Park, City Park Recreation Center, and many other neighborhood and community parks provide various recreation facilities. Westminster has several golf courses, including Legacy Ridge Golf Course, The Heritage Golf Course at Westmoor and the Hyland Hills golf course.

All content from Kiddle encyclopedia articles (including the article images and facts) can be freely used under Attribution-ShareAlike license, unless stated otherwise. Cite this article:
Westminster, Colorado Facts for Kids. Kiddle Encyclopedia.