The City of Arvada is a Home Rule Municipality located in Jefferson and Adams counties, a part of the Denver-Aurora-Lakewood, CO Metropolitan Statistical Area of the U.S. State of Colorado. The United States Census Bureau estimated the city population at 111,707 residents as of July 1, 2013, ranking Arvada as the seventh most populous municipality in Colorado. The Olde Town Arvada historic district is located 7 miles (11 km) northwest of the Colorado State Capitol in Denver. 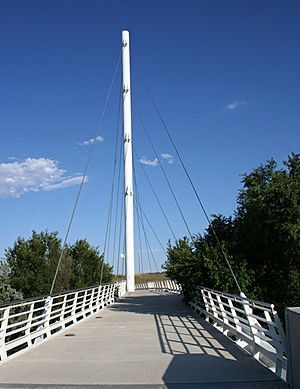 The first documented discovery of gold in the Rocky Mountain region occurred on June 22, 1850, when Lewis Ralston, a Georgia prospector headed for the California gold fields, dipped his sluice pan into a small stream near its mouth at Clear Creek. Ralston found about 1/4 ounce (6 g) of gold, then worth about five dollars. Ralston's companions named the stream Ralston's Creek in his honor, but they all left the next morning, drawn by the lure of California gold.

During the Pike's Peak Gold Rush in 1858, Ralston brought another group of prospectors back to the site of his first discovery. The placer gold in the area soon played out, but hard rock deposits of gold were found in the mountains to the west. Some of the miners abandoned their search for gold and returned to farm the rich bottom land along Ralston Creek and Clear Creek. They found an eager market for their crops among other gold seekers. The Territory of Colorado was formed on February 28, 1861, and the farms in the valley expanded to feed the growing population of the region.

In 1870, the Colorado Central Railroad laid tracks through the area on its route from Golden to link up with the Kansas Pacific Railroad and the Denver Pacific Railroad at Jersey Junction, 3 miles (5 km) north of Denver. On December 1, 1870, Benjamin F. Wadsworth and Louis A. Reno platted the Ralston Point townsite along the railroad. To avoid confusion with other communities along Ralston Creek, Ralston Point was soon renamed Arvada in honor of Hiram Arvada Haskin, brother-in-law of settler Mary Wadsworth. Her husband, Benjamin Wadsworth, became the first postmaster of Arvada. Colorado was granted statehood on August 1, 1876, and the Town of Arvada was formally incorporated on August 14, 1904. A vibrant agricultural community, Arvada claimed the title "Celery Capital of the World."

Arvada grew rapidly during the latter half of the 20th century as a suburb of nearby Denver, the state capital. Arvada became a Statutory City on October 31, 1951, and a Home Rule Municipality on July 23, 1963. By the end of the millennium, the population of Arvada exceeded 100,000.

The climate is described as Humid Continental by the Köppen Climate System, abbreviated as Dfb.

The Amtrak California Zephyr passes through the City of Arvada westbound each morning and eastbound each evening. This route through the scenic heart of the Rocky Mountains is one of the most popular rail routes in the United States. Full Amtrak passenger and parcel service is available at the nearby Denver Union Station.

Arvada is served by Denver International Airport and nearby Rocky Mountain Metropolitan Airport.

In 2014 the League of American Bicyclists designated Arvada as a Silver Level Bicycle Friendly Community.

There were 44,427 households out of which 31.9% had children under the age of 18 living with them, 52.5% were married couples living together, 10.7% had a female householder with no husband present, and 32.3% were non-families. 26.3% of all households were made up of individuals and 9.8% had someone living alone who was 65 years of age or older. The average household size was 2.48 and the average family size was 3.00.

All content from Kiddle encyclopedia articles (including the article images and facts) can be freely used under Attribution-ShareAlike license, unless stated otherwise. Cite this article:
Arvada, Colorado Facts for Kids. Kiddle Encyclopedia.