Rocky Flats National Wildlife is an expanse of grasslands, shrublands and wetlands, including rare xeric tallgrass prairie, where natural processes support a broad range of native wildlife. Working with others, the refuge conserves the unique biotic communities and sustains wildlife populations at the interface of mountains and prairies on Colorado's Front Range. 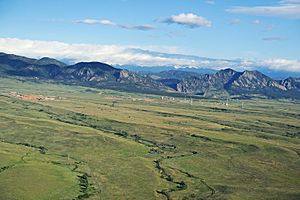 The Rocky Flats National Wildlife Refuge is one of over 560 refuges in the National Wildlife Refuge System – a network of lands set aside and managed by the U.S. Fish and Wildlife Service specifically for wildlife. The Refuge is located along the Front Range of Colorado at the intersection of Jefferson, Boulder, and Broomfield counties. The U.S. Fish and Wildlife Service manages the Refuge.

Native Americans occupied the land intermittently prior to the 1800s and limited artifacts have been located from this era. Starting in 1868, the Scott family established a homestead here and the land was used to raise cattle. Later, the Lindsay family raised cattle and built a house and barn in the 1940s.

In 1951, the U.S. Atomic Energy Commission acquired 2,519 acres, which included the Lindsay property, for the Rocky Flats Plant to produce nuclear and nonnuclear weapons including plutonium fission primaries for nuclear weapons. An additional 4,027 acres were acquired in 1974 for plant expansion. This 6,500-acre Rocky Flats Site was one of 13 nuclear weapons production facilities in the United States during the Cold War and was managed by the U.S. Department of Energy (DOE). The plant operated from 1952 to 1994 with manufacturing activities taking place in the center portion of the site with a large buffer zone around the area.

Nuclear production work stopped briefly to address environmental and safety concerns, and was resumed in 1990. In 1992, the Rocky Flats mission was terminated when President George H. W. Bush canceled the W-88 Trident Warhead program. Nuclear and nonnuclear production stopped in 1993, and in 1994 the last shipment of defense-related materials was sent off-site.

The plant was subject to a $7 billion Superfund investigation and environmental cleanup effort. The site was added to the U.S. Environmental Protection Agency’s (EPA) National Priorities List (Superfund List) in 1989. It was renamed the Rocky Flats Environmental Technology Site as of 1994. Through the Rocky Flats National Wildlife Refuge Act of 2001, the site was established as a national wildlife refuge while cleanup of the site was underway. With oversight from the EPA and Colorado Department of Public Health and the Environment (CDPHE), the DOE completed the $7 billion cleanup in 2005. The DOE still maintains 1,300 acres as part of their legacy management for long-term care and maintenance, and to ensure the cleanup is functioning as designed. These lands are not part of the Refuge.

The Rocky Flats National Wildlife Refuge consists of lands that were the former Rocky Flats Plant security buffer zone. The Superfund investigation and cleanup effort found that Refuge lands (then-called the Peripheral Operable Unit) would be suitable for unlimited use and unrestricted exposure - that is, any use. Under the Rocky Flats National Wildlife Refuge Act of 2001 (Pub.L. 107-107, 115 Stat. 1379, enacted December 28, 2001), most of the 6,240-acre (25.3 km2) Rocky Flats site became a refuge, provided that certification from the United States Environmental Protection Agency (EPA) is obtained and which asserts that the cleanup and closure have been completed. The refuge does not include the 600 acres that contain the former weapons site and monitoring areas. These remain under the jurisdiction of the DOE and will not be opened to the public.

The Comprehensive Conservation Plan (CCP) emphasizes wildlife and habitat conservation, and a moderate level of wildlife-dependent public use.

On April 17, 2015, the U.S. Court of Appeals terminated objections against a 2011 land exchange affecting the refuge. This exchange added over 600 acres of land to refuge and acquired over 1,200 acres of subsurface mineral rights beneath the refuge in exchange for a 300-foot transportation corridor along the refuge's eastern boundary.

In September 2015, the wildlife refuge opened for two guided hikes. It officially opened to the public Sep. 15, 2018.

All content from Kiddle encyclopedia articles (including the article images and facts) can be freely used under Attribution-ShareAlike license, unless stated otherwise. Cite this article:
Rocky Flats National Wildlife Refuge Facts for Kids. Kiddle Encyclopedia.