The Town of Granby is the Statutory Town that is the most populous municipality in Grand County, Colorado, United States. The town population was 2,079 at the 2020 United States Census. Granby is situated along U.S. Highway 40 in the Middle Park basin, and it is about 85 miles (137 km) northwest of Denver and 14 miles (23 km) southwest of Rocky Mountain National Park.

U.S. Route 40 passes through the center of town as Agate Avenue, leading south and east over Berthoud Pass to the Denver area, west 10 miles (16 km) to Hot Sulphur Springs, the Grand County seat. Kremmling is 27 miles (43 km) to the west on US 40. U.S. Route 34 intersects US 40 on the west side of Granby and leads northeast into Rocky Mountain National Park, crossing the mountains as Trail Ridge Road and reaching Estes Park 60 miles (97 km) northeast of Granby.

According to the United States Census Bureau, Granby has a total area of 12.8 square miles (33.1 km2), all land.

There were 579 households, out of which 37.3% had children under the age of 18 living with them, 55.3% were married couples living together, 7.6% had a female householder with no husband present, and 32.5% were non-families. 21.9% of all households were made up of individuals, and 6.4% had someone living alone who was 65 years of age or older. The average household size was 2.59 and the average family size was 3.05.

Many Granby and Grand County residents are descended from pioneer settlers who arrived before the country was fully surveyed. Early families established themselves under the Homestead Act of 1862, which allowed easy access to land to those who would inhabit and improve upon the territory.

Since the turn of the century, families have contended for prime ranch land. The Huddlers and Cooks are descended from original homesteaders. Their waning ranch once covered approximately 10,000 acres (40 km2) and was rich in cattle and hay. 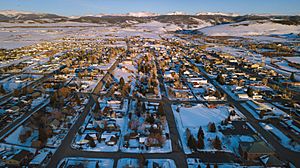 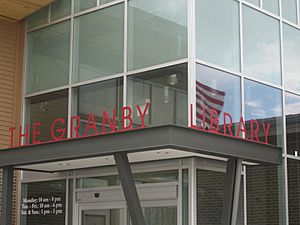 Amtrak, the national passenger rail system, provides daily service to Granby, operating its California Zephyr daily in both directions between Chicago and Emeryville, California, across the bay from San Francisco.

Granby-Grand County Airport (IATA: GNB, ICAO: KGNB, FAA LID: GNB), a small airport one mile east of town, serves as a stopover for transient general aviation flights, as well as hosts some local aviation activity. There are currently no scheduled passenger carrier flights into or out of the airport, which features a 5,000-foot-long (1,500 m) by 75-foot-wide (23 m) asphalt runway. Services at the airport are limited to aviation fuel for both piston and jet/turboprop aircraft. According to the Official Airline Guide (OAG), the airport was previously served by Rocky Mountain Airways which operated scheduled passenger flights to Denver during the mid 1970s with small de Havilland Canada DHC-6 Twin Otter turboprop aircraft.

This climate type is dominated by the winter season, a long, bitterly cold period with short, clear days, relatively little precipitation mostly in the form of snow, and low humidity. According to the Köppen Climate Classification system, Granby has a subarctic climate, abbreviated "Dfc" on climate maps.

All content from Kiddle encyclopedia articles (including the article images and facts) can be freely used under Attribution-ShareAlike license, unless stated otherwise. Cite this article:
Granby, Colorado Facts for Kids. Kiddle Encyclopedia.