Kids Encyclopedia Facts
This page is about the county in Utah. For the other county of the same name (in Colorado), see Grand County, Colorado.

Grand County is a county on the east central edge of Utah, United States. As of the 2010 United States Census, the population was 9,225. Its county seat and largest city is Moab. 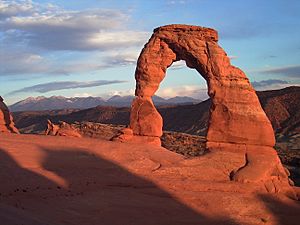 Delicate Arch, one of the most famous arches in Arches National Park

According to the U.S. Census Bureau, the county has a total area of 3,684 square miles (9,540 km2), of which 3,672 square miles (9,510 km2) is land and 12 square miles (31 km2) (0.3%) is water. The Green River forms the western boundary and Colorado lies on the eastern boundary. The Colorado River flows through the southeast corner. Deserts, cliffs and plateaus make up the scenery, with few settlements apart from the city of Moab, a Colorado River oasis. Arches National Park lies in the southern part of the county, just north of Moab. Also, the northernmost extension of Canyonlands National Park lies in the southwest corner of the county.

Grand County is the Utah county with the lowest percentage of LDS Church members in the state. Utah's population overall is about 62% Mormon, while Grand County is about 26% Mormon.

The Denver Museum of Natural History opened a small Cedar Mountain Formation quarry that has produced diverse dinosaur fossils including theropods and ornithopods of varying states of growth. An adult and juvenile sauropod were also recovered from the quarry. The adult was designated the type specimen of the genus Venenosaurus. 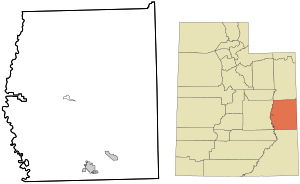 All content from Kiddle encyclopedia articles (including the article images and facts) can be freely used under Attribution-ShareAlike license, unless stated otherwise. Cite this article:
Grand County, Utah Facts for Kids. Kiddle Encyclopedia.