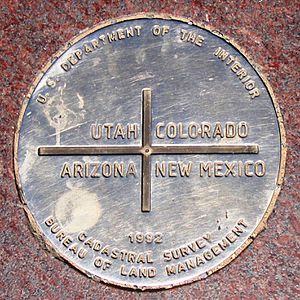 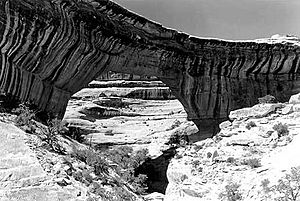 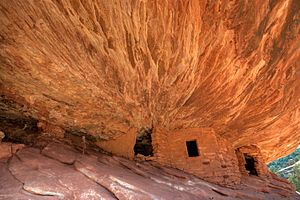 House on Fire ruin, one of many Ancestral Pueblo ruins in the county

San Juan County is a county located in the southeastern portion of the U.S. state of Utah. As of the 2010 census, the population was 14,746. Its county seat is Monticello, while its most populous city is Blanding. The county was named by the Utah State Legislature for the San Juan River, itself named by Spanish explorers (in honor of Saint John).

San Juan County was organized in 1880.

The county's western and southern boundaries lie deep within gorges carved by the Colorado and San Juan Rivers. Tributary canyons, cutting through rock layers of the surrounding deserts, have carved the land up with chasms, cliffs and plateaus. In the center of the county are Cedar Mesa, Comb Wash, Natural Bridges and Hovenweep National Monuments. Canyonlands National Park is primarily within the county borders. The Eastern side of Glen Canyon National Recreation Area / Lake Powell in also in San Juan County. Rising above all, the Blue (Abajo) Mountains reach to nearly 12,000 feet (3,700 m) and the La Sal Mountains rise to 13,000 feet (4,000 m). Both ranges are covered with lush forests vividly contrasting with the scenery below. The elevation change within the county is from near 13,000 feet (4,000 m) in the La Sal Mountains to 3,000 feet (910 m) at Lake Powell, an elevation change of 10,000 feet (3,000 m). The county is cut by deep and spectacular canyons, red rock and mountain meadows, desert, and evergreen forest. The towns run primarily on a north/south axis along U.S. Route 191 and U.S. Route 163 from La Sal in the north to Monument Valley in the south.

The only operating Uranium Processing plant in the United States operates in the town of Blanding, population 3,375.

San Juan County is home to numerous oil and gas fields that produce primarily from the Desert Creek and Ismay Formations.

San Juan County is bordered by more counties than any other county in the United States, at 14. 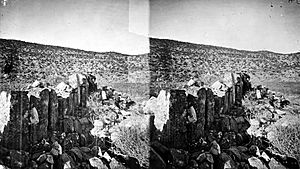 All content from Kiddle encyclopedia articles (including the article images and facts) can be freely used under Attribution-ShareAlike license, unless stated otherwise. Cite this article:
San Juan County, Utah Facts for Kids. Kiddle Encyclopedia.