Wayne County is a county in the U.S. state of Utah. As of the 2010 census, the population was 2,778, making it the fourth-least populous county in Utah. Its county seat is Loa.

According to the U.S. Census Bureau, the county has a total area of 2,466 square miles (6,390 km2), of which 2,461 square miles (6,370 km2) is land and 5.8 square miles (15 km2) (0.2%) is water. The Green River, passing through the canyons of Canyonlands National Park, forms the eastern boundary. The San Rafael Desert occupies the center of the county. Thousand Lake Mountain and Boulder Mountain flank Rabbit Valley on the western end of the county, where beautiful forests contrast with the deserts to the east. The small population of the county is centered in Rabbit Valley, with one town of 200, Hanksville, located in Graves Valley North of the Henry Mountains. Wayne County is also home of Capitol Reef National Park.

Panorama of the Great Gallery in Canyonlands National Park

As of 2017 the largest self-identified ancestry groups/ethnic groups in Wayne County, Utah were: 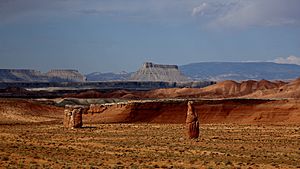 View north of Hanksville from Route 24. Factory Butte in background.

All content from Kiddle encyclopedia articles (including the article images and facts) can be freely used under Attribution-ShareAlike license, unless stated otherwise. Cite this article:
Wayne County, Utah Facts for Kids. Kiddle Encyclopedia.