Sevier County is a county located in the central section of the U.S. state of Utah. As of the 2010 census, the population was 20,802. Its county seat and largest city is Richfield. The county was formed on January 16, 1865, as a split off from Sanpete County to the north. It was named for the Sevier River, which winding path forms its western boundary.

Indigenous peoples migrated into this area by 10,000 years ago, developing different cultures. The Fremont culture of Native Americans occupied the area that is now Sevier County from about 2000 to 700 years before the present. The Clear Creek site contains numerous native petroglyphs from that period.

In Utah, the Numic- (or Shoshonean) speaking peoples of the Uto-Aztecan language family evolved into four distinct groups in the historic period: the Northern Shoshone, Goshute or Western Shoshone, Southern Paiute, and Ute peoples. The central and eastern sections of this territory were occupied primarily by various bands of the Ute. Historic tribes occupied the territory of Utah at the time of the first European contact by Spanish missionaries, and later settlement by European Americans in the 19th century.

The first non-Native Americans to see the Sevier River were most likely Catholic fathers Silvestre Vélez de Escalante and Francisco Atanasio Domínguez, missionaries who passed through on their expedition to California in 1776. The Old Spanish Trail (trade route) was the route they mapped. Over the course of the next hundred years the trail was used by fur trappers, hunters, government officials, and many more. This carried many people through what was later organized as Sevier County.

Permanent European-American colonization of this area is considered to have begun with the founding of Richfield within the present-day county boundaries. The area was colonized by the Mormon settlers on 15 June 1864. Much of the area was populated by new immigrants who were Mormon converts from Scandinavian countries. Because of the growth in this small community, the people officially created Sevier County in early 1865.

Interstate 70 runs through the county. As Richfield is about halfway between the major cities of Los Angeles, California and Denver, Colorado, it has built a hospitality industry, with motels, restaurants, etc. serving travelers on their way through the area.

Fremont Indian State Park is found in the Clear Creek Canyon, adjacent to I-70. It is noted for its archaeological remains from the ancient Native American Fremont culture. It has a museum displaying artifacts found at the site. 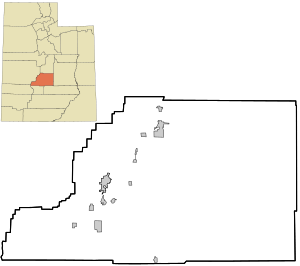 All content from Kiddle encyclopedia articles (including the article images and facts) can be freely used under Attribution-ShareAlike license, unless stated otherwise. Cite this article:
Sevier County, Utah Facts for Kids. Kiddle Encyclopedia.