Richfield is a city in and the county seat of Sevier County, Utah, United States, and is the largest city in southern-central Utah. 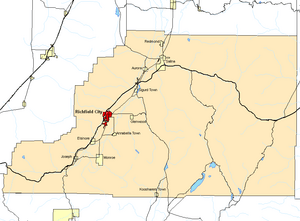 Richfield is highlighted in red

As of the 2010 census, the city population was 7,551. It lies in the Mormon Corridor, just off Interstate 70 about 40 miles (64 km) east of its junction with Interstate 15. The county can be best described as "rural diversified" due to the convergence of agricultural, retail and industrial activities. Richfield has developed as a regional tourist center because it is located on the interstate freeway about halfway between Los Angeles, California and Denver, Colorado, attracting many automobile travelers who stop at the city.

Richfield is remote from larger cities, about 100 miles (160 km) or more in any direction from more populous towns, while dozens of smaller communities are found in the general area. Its remoteness, plus its location on major transportation corridors, makes it central Utah's de facto regional capital, a shopping and "commercial capital of a vast mountain-valley region." Many people from the region drive to Richfield to shop, bowl, golf, to attend theater, concerts, or for religious gatherings. They are also drawn to the community college, affiliated with Snow College, and go there to receive medical care. Richfield is part of "Panoramaland;" it is on the thoroughfare to several nearby national parks and national forests.

Prehistoric people occupied the Richfield area for more than 7,000 years. Fremont culture remains are found near most community sites in the Sevier area and are dated from approximately CE 1 to CE 1000. In the late summer of 1776, Father Escalante and his party of Spanish explorers passed through the general vicinity, looking for a trail to link Nuevo Mexico and California. During the late 1820s, Jedediah Smith and other fur traders crossed the area. Sevier County lies on one of the variants on the Old Spanish Trail between Santa Fe, New Mexico and California and was used by travelers between 1830 and 1850.

In the early part of January 1864, a party of ten men under the leadership of Albert Lewis came from Sanpete County, Utah and arrived in what is now Richfield. The Mormon settlers found fertile soil, good water and wood in the nearby hills. They decided that it was a desirable site for a settlement. These pioneers made a dwelling place for all ten men, which they called 'The Hole in the Ground.' They carefully covered this hole with brush willows and other materials and made a crude chimney of rocks. This dugout was located on today's Main Street. These men spent the remainder of the winter in this dwelling, planning and preparing for the time when they could bring their families.

The early Mormon settlements were abandoned in 1867 due to the conflict known as the Black Hawk War. But, when resettled in 1871, Richfield grew to become a regional center. The coming of the Denver and Rio Grande Railroad in 1891 opened the valley for expanded agricultural commerce and mining.

In 1939, Utah Governor Henry H. Blood vetoed a proposal for a junior college in Richfield. Fifty-seven years later, Snow College opened a Richfield campus, which serves about 600 students per year.

As in most settled areas of rural Utah, The Church of Jesus Christ of Latter-day Saints (LDS Church) plays a prominent role. The Mormons were highly industrious colonizers. From 1847, when they founded Salt Lake City, until 1877, they founded 360 towns. Following direction from Brigham Young, Latter-day Saints founded the town and outlying hamlets about 150 years ago. Members of the LDS Church are predominant among the residents.

Even in this heart of Mormon country, non-Mormons and non-participating Mormons, the latter euphemistically called "less-actives," fill a percentage of elected offices. Due largely to combined influences of conservative rural culture and the Latter-day Saints, the voters of the city and the surrounding county are predominately [Republican Party (United States)|Republican]].

Richfield is served by major transportation access - situated along Interstate 70 and within 30 minutes of Interstate 15. Richfield is located 159 miles (256 km) from Salt Lake City and 164 miles (264 km) from St. George.

Richfield experiences four distinct seasons. Winter high temperatures average in the 30s and 40s with many milder days; low temperatures average in the teens and twenties, with a few mornings starting near or below zero. Snowfall is common, but usually melts in a day or two; however, deeper lasting snow cover is not uncommon. Still, December and January average among Richfield's drier months. Summer days are warm, with normal July highs in the 90s and occasional hot spells that near 100 degrees. Nighttime temperatures during the summer are comfortable—usually in the 50s or 60s. July through September, "monsoonal" thunderstorms frequently form over the nearby peaks contributing to over a third of the 8.12 inches (206.3mm) of annual rainfall. Because of its low humidity and mile-high altitude, the Sevier Valley experiences its average first frost by late September and its last in late May, despite the typically warm fall and spring days. Richfield's record high is 104 °F (40 °C), set on July 23, 1931, and the record low is -33 °F (-36 °C), set on February 6, 1989.

The city has seen an increase in population in every decennial census since 1940, at which time it was reported to have 3,584 people living in the city. 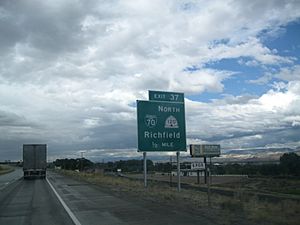 Richfield is served by Greyhound to Denver and Las Vegas, Nevada.

The local weekly newspaper is The Richfield Reaper.

Richfield is located in the Sevier School District. There are two elementary schools (Ashman and Pahvant), one middle school (Red Hills), one high school (Richfield), and one alternative high school (Cedar Ridge). There is also a satellite campus of Snow College.

All content from Kiddle encyclopedia articles (including the article images and facts) can be freely used under Attribution-ShareAlike license, unless stated otherwise. Cite this article:
Richfield, Utah Facts for Kids. Kiddle Encyclopedia.