Beaver County is a county located in the U.S. state of Utah. As of the 2010 census, the population was 6,629. Its county seat and largest city is Beaver. The county was named for the abundance of beavers in the area.

While explorers first visited present-day Beaver County in the 1776 Dominguez–Escalante Expedition, the county was created by the Utah territorial legislature from a section of Iron County on January 5, 1856 when Mormon settlers founded the city of Beaver, Utah. The county was named after the animal which was plentiful there.

According to the U.S. Census Bureau, the county has a total area of 2,592 square miles (6,710 km2), of which 2,590 square miles (6,700 km2) is land and 2.1 square miles (5.4 km2) (0.08%) is water. The Tushar Mountains lie on the eastern boundary of the county, reaching to 12,000 feet (3,700 m) in elevation, and providing water for the farming communities of Beaver and Manderfield. To the west, barren desert valleys typify the scenery, separated by mountains lightly forested with junipers. 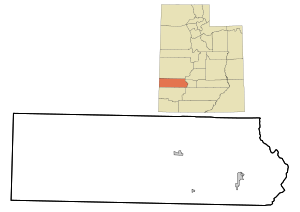 All content from Kiddle encyclopedia articles (including the article images and facts) can be freely used under Attribution-ShareAlike license, unless stated otherwise. Cite this article:
Beaver County, Utah Facts for Kids. Kiddle Encyclopedia.