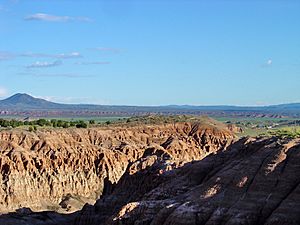 Lincoln County is a county located in the U.S. state of Nevada. As of the 2010 census, the population was 5,345. Its county seat is Pioche.

Lincoln County was established in 1866 after Congress enlarged Nevada by moving its state line eastward and southward at the expense of Utah and Arizona territories. It is named after Abraham Lincoln, the 16th President of the United States. Original legislation called for the creation of a "Stewart County", after Nevada Senator William M. Stewart, but this was later changed in a substitute bill. Crystal Springs was the county's first seat in 1866, followed by Hiko in 1867, and Pioche in 1871.

Lincoln County initially included the town of Las Vegas. However, Clark County, Nevada, including Las Vegas, was separated from Lincoln County effective July 1, 1908, by act of the Nevada Legislature.

Area 51 is in Lincoln County, and the county sheriff acts in proxy for the perimeter security forces.

According to the U.S. Census Bureau, the county has a total area of 10,637 square miles (27,550 km2), of which 10,633 square miles (27,540 km2) is land and 3.8 square miles (9.8 km2) (0.04%) is water. While only the third largest county by area in the state of Nevada, it is the seventh-largest county in area in the entire United States, not including boroughs and census areas in Alaska. The south ridge of Mount Grafton, the summit of which is just north of the county line in neighboring White Pine County, contains the highest point in Lincoln County at 10,640 feet (3,240 m). The highest independent mountain completely within Lincoln County is Shingle Peak, while the county's most topographically prominent peak is Mormon Peak.

There are 16 official wilderness areas in Lincoln County that are part of the National Wilderness Preservation System. All are managed by the Bureau of Land Management. Several extend into neighboring counties (as indicated below). 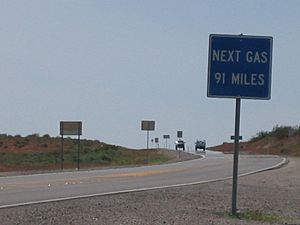 All content from Kiddle encyclopedia articles (including the article images and facts) can be freely used under Attribution-ShareAlike license, unless stated otherwise. Cite this article:
Lincoln County, Nevada Facts for Kids. Kiddle Encyclopedia.