Hiko is a small, agrarian community in the Tonopah Basin on State Route 318 in Lincoln County, Nevada, United States. It is a census-designated place, with a population of 119 at the 2010 census. 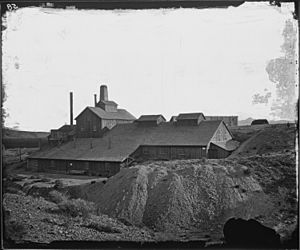 Hiko was the county seat of Lincoln County from 1867 to 1871 and a few hundred residents lived nearby, due largely to silver mines in the area. Today, the area is a farming and ranching area, and not much remains of the old town except the cemetery, some mill ruins and a red rock building that was a general store. Although populated, Hiko appears on at least two ghost town lists. Most of the residents of Hiko own farms or ranches, and little to no industrial activity takes place there. In 1871 Hiko was replaced as the county seat of Lincoln County with the current seat, Pioche.

The Hiko and Crystal Springs provide a large supply of water for the Hiko farms and ranches. The Hiko farming community is located in the north end of the Pahranagat Valley and lies at an elevation of 3,869 feet (1,179 m), with a ZIP code of 89017.

All content from Kiddle encyclopedia articles (including the article images and facts) can be freely used under Attribution-ShareAlike license, unless stated otherwise. Cite this article:
Hiko, Nevada Facts for Kids. Kiddle Encyclopedia.