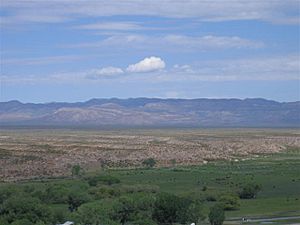 A ranch near Ash Springs

The Pahranagat Valley is a Tonopah Basin landform in Lincoln County, Nevada.

The more fertile part of Pahranagat Valley is a narrow ribbon of green (no more than 1-mile (1.6 km) wide) like an oasis in the vast Nevada desert. It is approximately 40 miles (64 km) long running north and south and is watered by three large natural springs of water (Hiko Springs, Crystal Springs and Ash Springs) and many smaller ones as well. It has four lakes, two near the north end of the valley (Nesbitt Lake and Frenchie Lake) and two towards the south end (Upper Pahranagat Lake and Lower Pahranagat Lake). The southern half of the valley including the two lakes is home to the Pahranagat Valley National Wildlife Refuge.

The more inhabited areas in Pahranagat Valley include (from north to south) Hiko, Ash Springs, Richardville and Alamo, the town of Alamo being the largest and where all of the schools for the valley are located. The closest town to Pahranagat Valley is over 50 miles (80 km) to the east at Caliente, Nevada.

The Crystal Springs area, used as a watering spot and campsite, was a principal stop-over on the Mormon Trail Alternate Route. In the late 1850s, the area was a haven for outlaws who pastured hundreds of head of stolen cattle and horses on its meadows.

Silver ore was discovered in 1865 on Mount Irish, and Logan sprang briefly into existence. A mill to process the ore was built in Hiko, the ruins of which are still in existence.

Since the late 19th century, Pahranagat Valley has been primarily an agricultural community. Presently it is also a bedroom community for many who work in Las Vegas even though the commute is over 100 miles (160 km) one way. 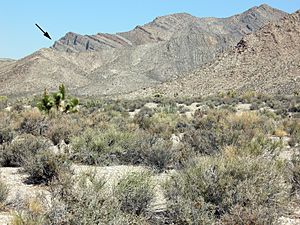 The geology of the region includes the Alamo meteor impact which scattered layers of impact debris across the area near Alamo.

All content from Kiddle encyclopedia articles (including the article images and facts) can be freely used under Attribution-ShareAlike license, unless stated otherwise. Cite this article:
Pahranagat Valley Facts for Kids. Kiddle Encyclopedia.