Alamo lies in the Pahranagat Valley. Its economy is dependent primarily upon ranching. The closest attraction is the Pahranagat National Wildlife Refuge.

Between Alamo and the town of Rachel is the site of the Devonian Alamo Impact Breccia.

According to the U.S. Census Bureau, the Alamo census-designated place has an area of 30.3 square miles (78.4 km2), all of it land. 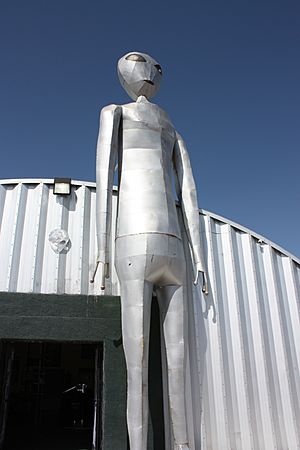 Alamo attracts tourists and truckers traveling from Las Vegas to northern Nevada and Idaho. Attractions include the nearby warm springs, wildlife refuge, Extraterrestrial Highway and Area 51. Gas stations in Alamo cater to these tourists by offering alien memorabilia. There are two truck stops, the Alamo Sinclair, the Ash Springs Shell, that offer large diesel filling areas to attract passing truckers. There are also four motels in Alamo, the Alamo Inn, Sunset View Inn, Windmill Ridge, and A Cowboy's Dream.

There are three different religious denominations with churches in Alamo:

Alamo has a police force, a volunteer fire department, phone and internet services, a medical clinic, and a public library. Nevada Bank and Trust offers financial services to residents. Alamo's first radio station, KQLN 91.3 FM, went on the air on November 17, 2010, but the station's license was cancelled at licensee's request, effective on July 2, 2013.

Public education is provided by the Lincoln County School District, with offices in Panaca, Nevada. There are three schools in the valley.

All content from Kiddle encyclopedia articles (including the article images and facts) can be freely used under Attribution-ShareAlike license, unless stated otherwise. Cite this article:
Alamo, Nevada Facts for Kids. Kiddle Encyclopedia.