Panaca is an unincorporated town in eastern Lincoln County, Nevada, United States, on State Route 319, about 1 mile (1.6 kilometers) east of U.S. Route 93, near the border with Utah. Its elevation is 4,729 feet (1,441 meters) above sea level. As of the 2010 census, it had a population of 963. It is one of only two cities in Nevada that prohibits gambling, the other being Boulder City. 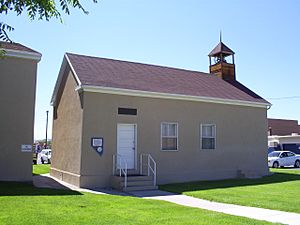 The Panaca Ward Chapel (1867–68) is the oldest building in Lincoln County. 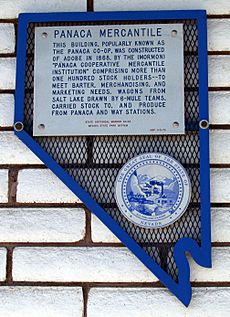 Panaca was southern Nevada's first permanent settlement, founded as a Mormon colony in 1864. It was originally part of Washington County, Utah, but the congressional redrawing of boundaries in 1866 shifted Panaca into Nevada. It is the only community in Nevada to be "dry" (forbidding the sale of alcoholic beverages), and the only community in Nevada, besides Boulder City, that prohibits gambling.

Coke ovens here once produced charcoal for the smelters in nearby Bullionville (now a ghost town), but the town's economy is predominantly agricultural.

The name "Panaca" comes from the Southern Paiute word Pan-nuk-ker, which means "metal, money, wealth". William Hamblin, a Mormon missionary to the Paiutes, established the Panacker Ledge (Panaca Claim) silver mine there in 1864.

The following Nevada Historical Markers have been placed in Panaca:

Panaca celebrates Pioneer Day on the Saturday closest to July 24. Events include a 6 a.m. cannon firing, games and races, a parade, art displays, and a community dinner. This coincides with the Utah holiday commemorating the arrival of the Mormon pioneers in the Salt Lake Valley.

All content from Kiddle encyclopedia articles (including the article images and facts) can be freely used under Attribution-ShareAlike license, unless stated otherwise. Cite this article:
Panaca, Nevada Facts for Kids. Kiddle Encyclopedia.