Kids Encyclopedia Facts
For counties with a similar name, see Washington County (disambiguation).
Not to be confused with Washington, Utah, a city in south central part of the county. 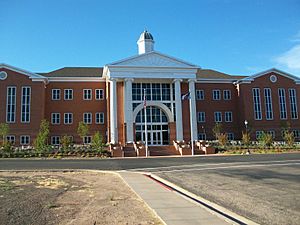 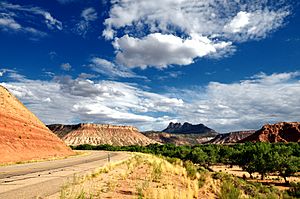 The earliest settlement was Fort Harmony in 1852. Santa Clara was established in 1854 as a mission to the natives that lived on the Santa Clara River. Hamblin and Pinto were settled along the Los Angeles - Salt Lake Road in 1856, as was Gunlock in 1857.

Next came the settlements established as colonies to grow cotton, before the beginning of the American Civil War. They were located along the Virgin River, in the warmer climate below the Great Basin, that was called Utah's Dixie. The first were Virgin and Washington in 1857. Heberville, Pintura and Toquerville followed in 1858, Grafton, Harrisburg and Pine Valley in 1859. Adventure in 1860, and Duncans Retreat, Northrop, Shonesburg and St. George in 1861.

Fort Harmony, Adventure, Northrup were abandoned and Santa Clara, St. George, Washington, Harrisburg, Heberville, Grafton and Duncans Retreat, were nearly destroyed by the Great Flood of 1862 that followed forty-four days of rainfall in January and February 1862.New Harmony, Springdale and Rockville were founded in 1862 by settlers flooded out of Fort Harmony, Adventure, Northrup and other places in the vicinity. Harrisburg was relocated.

Shoal Creek later called Hebron, was a ranching community established in 1862 in the west of the county. Leeds was settled in 1867, and Silver Reef was a mining town begun in 1875 and abandoned by 1891 due to the collapse in silver prices.

According to the U.S. Census Bureau, the county has a total area of 2,430 square miles (6,300 km2), of which 2,426 square miles (6,280 km2) is land and 3.6 square miles (9.3 km2) (0.1%) is water. The elevation varies from 2,178 to 10,365 feet (3,159 m) in elevation. The lowest point in the state of Utah is located in the Beaver Dam Wash in Washington County, where it (seasonally) flows out of Utah and into Arizona. Washington County is made up of three major geographic areas; the Colorado Plateau in the east-northeast, the Great Basin in the northwest and the Mojave Desert in the south-southwest.

Most of the population is centered in the middle-south of the county near the border with Arizona (see St. George, Utah). Most national shopping, dining, and hospitality chains are located here, along with several local businesses. The climate of this section of the county is the driest; it only receives nearly 10" of rain each year. The terrain is also among the lowest in Washington County, making for a particularly hot and dry climate when compared to the rest of the county. Most homes are located in subdivisions, and an increasingly large urban sprawl exists. In Downtown St. George, several local restaurants and stores call this area home, and despite its extremely compact size, it tends to attract many locals and tourists alike. To combat the sprawl (which threatens many nature reserves and increases congestion), growth and promotion is being projected inward to the central area of the St. George, with many new centrally located developments being planned and constructed. The central valley of the city also contains Dixie State University, the only 4-year college within a 50-mile radius. Dixie High School is also located in the central valley.

Most commercial and industrial lots exist in the eastern portion of the Greater St. George Area in eastern St. George and Washington. Out there, land is generally inexpensive and closer to Interstate 15, making it a more viable option for shopping and dining. Rapidly expanding suburbs also exist there, especially in an area known as Washington Fields. Large irrigated farms have been sold to commercial and residential developers to make way for the anticipated need of more housing and business. Pine View High School is located in Washington, and serves this portion of the area. A second high school is planned to be built in Washington Fields due to the rapid growth.

The western portion of the urban area contains the cities of Santa Clara, Ivins, and Western St. George. While there is still some commercial and few industrial lots, land is considerably more expensive due to the scenic vivid-red cliffs and volcano lava fields, along with the close proximity to Snow Canyon State Park. This has resulted in the construction of many resort-style communities and gated subdivisions such as Entrada, Kayenta, and the Palisades. Abundant luxurious housing often exceeds $1,000,000 in price. However, there still are plentiful neighborhoods and older houses that tend to be more affordable. Snow Canyon High School is located in this area.

The southern portion of the city contains the neighborhoods of Bloomington and Hidden Valley and is also the location of Desert Hills High School. Limitations on development in this area exist due to terrain, and as such, it contains less population than its east and west counterparts. Despite is smaller size, the massive SR-7, also known as Southern Parkway, has been built as a beltway to accommodate future growth in the southeastern portion of St. George and Washington. The partially constructed freeway also connects the city to the all-new St. George Regional Airport, and in the future, will provide a vital connection to the community of Hurricane, which will thereby provide quicker and more efficient access to Zion National Park.

Despite its scenic location among red sandstone, lava fields, and the backdrop of the Pine Valley Mountains, the northern area of St. George is almost entirely undeveloped due to the Red Cliffs National Conservation Area, which protects a variety of endangered wildlife and unspoiled desert. The only communities in northern St. George are The Ledges and Winchester Hills in the west, and Green Springs, near Washington, in the east. While the community of Winchester Hills has existed for many decades, The Ledges is a newer development met with significant controversy. A few houses in the gate portion feature what many consider to be multimillion-dollar views of Snow Canyon State Park, and because of this, are visible from inside the state park. This has led many to believe that the beauty of Snow Canyon is in jeopardy due to the City of St. George's willingness to sell the land around the park to private companies. In reality, only three houses are visible from inside the canyon, although more visible lots exist to be built upon. On the opposite end of the city is Green Springs, an upscale multimillion-dollar development, which consists of a golf course and many distinct gated and non-gated housing communities.

In the extreme east of the area lies the cities of Hurricane and La Verkin. Because this locale is disconnected from the rest of the area by undeveloped swaths of land, it is still usually considered distinct from urban St. George, however this may change in the future due to anticipated development that will connect these two regions. This area is more farm-based than St. George, but is still enjoying the rapid expansion in commercial, industrial, and residential development like the rest of the region. It is served by Hurricane High School.

Outside the urban area

While the entire county, due to its large size, is considered part of the St. George Metropolitan Area, most land in the county is rural.

In the middle and north of Washington County, sparse population exists. The center-county communities of Central and Pine Valley are popular resort communities and contain many cabins and recreational parks, due to their locations in Dixie National Forest and the Pine Valley Mountains. Veyo and Dammeron Valley, also near the center of the county, are primarily ranching towns, with most houses situated on large plots of land. This central area of Washington County is generally more wet and humid than the rest of the county, due to its high elevation and high precipitation. In Pine Valley, precipitation often exceeds 20" per year.

The northern portion of Washington County is semi-arid and dry, albeit less so than in the southern portion. The only incorporated town in this area is Enterprise which has a population of just over 1,700. Enterprise is the home of the only secondary school outside of the Greater St. George Area, Enterprise High School. The town contains a small grocery store and multiple gas stations, but is relatively rural when compared to the bustling urban area of St. George.

Western Washington County is home to Gunlock, also a ranching town, and a small Native American reserve named Shivwits, occupied by the Shivwits Band of Paiutes. This area of the county is also the location of the lowest area of the state, Beaver Dam Wash.

Eastern Washington County is also sparsely populated. However, the towns of Rockville and Springdale are filled with major hotels and resorts, despite their small sizes. This is due to their extreme proximity to Zion National Park, one of the most visited national parks in the United States. Springdale in particular contains many kitschy shopping and dining options. Most of the income in these two towns is fueled by tourism alone.

The county includes an area along the Old Spanish Trail called Mountain Meadows. Zion National Park is located in the eastern part of Washington County.

There are 18 official wilderness areas in Washington County that are part of the National Wilderness Preservation System. Most are entities managed by the Bureau of Land Management, but some are integral parts of the above listed protected areas. Two of these extend into neighboring counties (as indicated below). Many of the BLM wildernesses are not much more than small appendages of Zion Wilderness in Zion National Park.

As of 2015, the largest European self-reported ancestry groups in Washington County are: 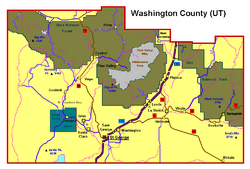 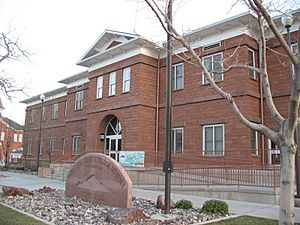 All content from Kiddle encyclopedia articles (including the article images and facts) can be freely used under Attribution-ShareAlike license, unless stated otherwise. Cite this article:
Washington County, Utah Facts for Kids. Kiddle Encyclopedia.