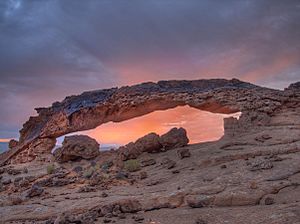 Kane County is a county located in the U.S. state of Utah. As of the 2010 census, the population was 7,125. Its county seat and largest city is Kanab. The county was named for Col. Thomas L. Kane, a friend of the Mormon settlers.

According to the U.S. Census Bureau, the county has a total area of 4,109 square miles (10,640 km2), of which 3,990 square miles (10,300 km2) is land and 118 square miles (310 km2) (2.9%) is water. The Colorado River, reformed as Lake Powell, forms its eastern boundary. Arizona lies on the southern boundary. Grand Staircase-Escalante National Monument covers much of the county. A rugged and inhospitable country of deserts, mountains and cliffs makes up the terrain, with breath-taking scenery in every area. Parts of Bryce Canyon National Park and Zion National Park extend into the northern and western portions of the county. The eastern part of the county is part of the Glen Canyon National Recreation Area. 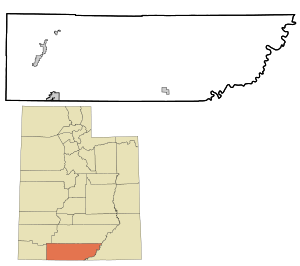 All content from Kiddle encyclopedia articles (including the article images and facts) can be freely used under Attribution-ShareAlike license, unless stated otherwise. Cite this article:
Kane County, Utah Facts for Kids. Kiddle Encyclopedia.