Kanab ( KƏ-nab) is a city in and the county seat of Kane County, Utah, United States. It is located on Kanab Creek just north of the Arizona state line. This area was first settled in 1864, and the town was founded in 1870 when ten Latter-day Saint families moved into the area. Named for a Paiute word meaning "place of the willows," Fort Kanab was built on the east bank of Kanab Creek in 1864 for defense against the Indians and as a base for the exploration of the area. The population was 4,312 at the 2010 census and an estimated 4,798 in 2018.

Kanab is located on the western Colorado Plateau.

Kanab has a borderline Mediterranean climate (Köppen Csa), more typical of exposed regions around Arizona’s Mogollon Rim. The city is rather wetter, especially during the winter months, and hotter than the typical Mountain West cool semi-arid climate. The dry spring season from April to June is warm to hot during the day and very clear but the hot sun and thin air typical of Utah mean that nights remain cool and frosts can occur even in May. In the summer, monsoon thunderstorms break up the dry weather between July and October. The winters are cool during the day and very cold at night, though a large proportion of the precipitation is still rain rather than snow, which rarely accumulated beyond 1 inch (2.5 cm) and has a median total fall of only 14.8 inches (0.38 m), or three-tenths that of Salt Lake City. As noted above, overall winter precipitation is slightly in excess of that required to qualify as a subhumid rather than semi-arid climate. 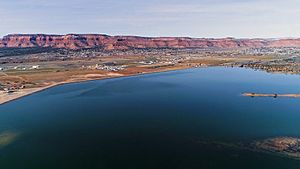 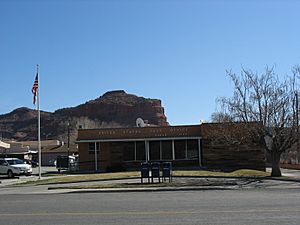 In 2010, construction began on the Jackson Flat Reservoir under the direction of the Kane County Water Conservancy District. The reservoir had been in various stages of planning for 19 years. Completion of the reservoir took 2 years of construction, and one year of filling. The Dam structure is composed of 800,000 yards of clay, dirt, and rock. The project was supervised by four engineering firms including the Utah State Engineer of Dam Safety, and the Army Corps of Engineers. The 4,228 acre-feet reservoir is an off stream site fed by a 24-inch pipe capable of transferring 23 acre feet of water per day. The average depth of the reservoir is 28 feet with a conservation pool that will sustain a 400 acre-foot pool of water. In April 2015, the reservoir reached 3000 acre-feet of water. Water volumes vary throughout the year as reserves are tapped during summer months to supplement local irrigation needs, and are then refilled during the winter season based on annual rainfall. The reservoir is located directly south of Kanab, East of the municipal airport and is visible from Highway 89A.

During planning and construction, crews discovered 10 sites of prehistoric Anasazi ruins, including human remains. Sites which would be below the water line were fully excavated and remains turned over to the local Paiute tribe for proper care and burial ceremonies. Sites above the projected water line remain un-excavated.

The Jackson Flat Reservoir has been stocked with trout, catfish, and bluegill fish varieties. The site supports non-motorized boating, fishing and swimming.

On January 10, 2006, the mayor at that time Kim Lawson and the city council passed Resolution 1-1-06R, titled The Natural Family: A Vision for the City of Kanab, codifying the definition of a "natural family":

"We envision a local culture that upholds the marriage of a man to a woman, and a woman to a man, as ordained of God... We see our homes as open to a full quiver of children, the source of family continuity and social growth. We envision young women growing into wives, homemakers, and mothers; and we see young men growing into husbands, home-builders, and fathers."

The nonbinding resolution was formulated by a conservative advocacy group from Salt Lake City. Though symbolic, it created controversy within the town, and prompted Arthur Frommer to refer to the community as homophobic, and urge it be boycotted by tourists.

A local civic group, The Kanab Boosters, published an open letter to ask Frommer to reconsider his boycott, making it clear that "only a small number of people agree with our city council regarding the Natural Family Proclamation." The Boosters also designed and provided stickers for citizens and resident business owners opposed to the resolution. The stickers featured a string of rainbow-colored human figures underneath the red rocks of Kanab and the phrase, "Everyone welcome here."

In 1914 Freddy Crystal arrived in Kanab saying that, while researching in Mexico, he had discovered that the great treasure of Montezuma, spirited away by the king's men before he died, was to be found in the mountains around the town. Many searches and digs by Crystal and those who followed him ended when a plan to drain a lake, in the belief that the treasure resided in an under-water cave, was stopped by the Government because it was one of the few refuges of the Kanab ambersnail.

Three Lakes, a privately owned wet meadow near Kanab, is one of only two natural habitats for the Kanab Ambersnail, a snail species which was listed as an endangered species in 1992 by the U.S. Fish and Wildlife Service and a species of conservation priority for the Arizona Game and Fish Department.

Kanab is served by the Kanab Municipal Airport, a general aviation facility.

All content from Kiddle encyclopedia articles (including the article images and facts) can be freely used under Attribution-ShareAlike license, unless stated otherwise. Cite this article:
Kanab, Utah Facts for Kids. Kiddle Encyclopedia.