Boulder City is a city in Clark County, Nevada. It is approximately 26 miles (42 km) southeast of Las Vegas. As of the 2010 census, the population of Boulder City was 15,023.

Boulder City is one of only two cities in Nevada that prohibits gambling (the other being Panaca).

The land upon which Boulder City was founded was a harsh, desert environment. Its sole reason for existence was the need to house workers contracted to build the Hoover Dam on the Colorado River (known commonly as Boulder Dam from 1933 to 1947, when it was officially renamed Hoover Dam by a joint resolution of Congress). Men hoping for work on the dam project had begun settling along the river in tents soon after the precise site for the dam had been chosen by the Bureau of Reclamation in 1930. Their ramshackle edifices were collectively known as "Ragtown". 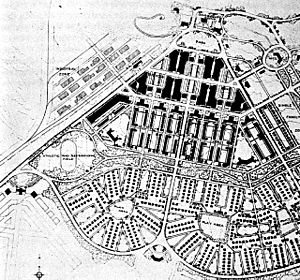 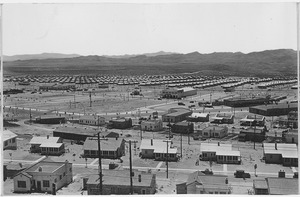 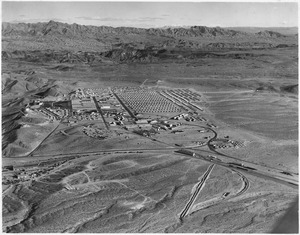 Boulder City was originally built in 1931 by the Bureau of Reclamation and Six Companies, Inc. as housing for workers who were building the Hoover Dam.

The sheer scale of the dam and duration of the project required the Bureau of Reclamation to consider the construction of a semi-permanent town rather than a temporary arrangement. Boulder City was exceptionally rare as an example of a town fully planned under government supervision. This is unlike 19th century privately funded company town examples found in the United Kingdom, such as Port Sunlight, or in the United States, such as Pullman, Chicago. 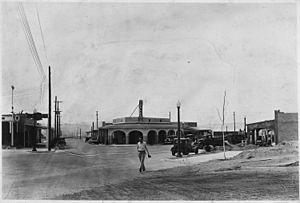 Boulder City was carefully planned through federal supervision as a model community, with Dutch-born urban architect Saco Rienk de Boer contracted to plan it. DeBoer had been a planner for Denver, Colorado, and was to design many towns and suburbs around the Rocky Mountain region. Because the Hoover Dam project itself represented a focus for optimism for a country suffering from the effects of the Great Depression, the town itself was to be an additional manifestation of this optimism. There was to be an emphasis on a clean-living environment for dam workers. The plan submitted by DeBoer in 1930 was formal and symmetrical with a park and the Bureau of Reclamation building at the termination of the two main axes. The plan was deemed too expensive to carry out in its original form and was modified to allow for more regular block sizes. Nevertheless, its allowance for public space and copious amounts of landscaping earned it the moniker "Nevada's Garden City". The provision of green landscape was another expression of the Bureau of Reclamation's "mission to reclaim and 'green' the American West."

The town was designed to house approximately 5,000 workers. The status of the workers on the Hoover Dam was reflected in their house sizes and locations. The most important employees had their residences on top of the hill nearer the apex. Managers were housed further down the hill, and dwellings for manual laborers were located furthest away from the public buildings and parks. The most radically modified portions of DeBoer's plan were in these lower-class residential blocks, where open space and parks were largely eliminated.

Commercial development was restricted and severely regulated under Sims Ely, the city manager. There were limits to the number of different types of stores allowed in the city, and all who wished to begin a business were screened for character and financial viability. On the other hand, there was no provision for schools in the burgeoning city, probably because the Bureau of Reclamation expected that single male workers would populate the town. The town made do with makeshift schoolrooms until the city won the right for state-funded schools to be established on the federal reservation upon which Boulder City was situated. No hospitals were provided in the city either. Injured workers had to travel 33 miles (53 km) to Las Vegas Hospital, and when a hospital was established in the city, females were not admitted for a number of years.

Boulder Theatre, then and now

Boulder Theatre in July 1932, the first air-conditioned building in the city

Boulder Theatre in September 2008, now owned by Desi Arnaz, Jr.; it is listed on the National Register of Historic Places.

Like early model company town Port Sunlight, the workers of Boulder City were under strict monitoring: alcohol was prohibited in the town until 1969, and gambling has been prohibited since the city's outset. Boulder Theatre, established in 1931, meant that workers were not obliged to travel to Las Vegas for amusements. Such measures were common for company towns dating back to the 19th century, since sober workers surrounded by their own gardens and provided with appropriate entertainment would be more productive during their working days.

In the case of Boulder City, the prohibition of alcohol and gambling was at least partly because of to the proximity of Las Vegas, which at the time was predominantly run by mobsters. Visitors to Boulder City were admitted by permit, and by 1932, there was a gatehouse through which all visitors had to pass.

While the establishment of Boulder City occurred while Las Vegas was modest in size with approximately 5,000 inhabitants, it was effectively the beginning of the fragmentation of cities in the region of Clark County. This move to disperse to multiple centers predated the decentralization movement of the 1970s. The nearby city of Henderson, founded in 1943 and based around the magnesium industry, was another early example of decentralization before Clark County had a significant population: "...the region began to decentralize and regroup as a multi-centered area early in its history." The independent governments of Henderson, North Las Vegas, Las Vegas, and Boulder City have perpetuated the fragmented nature of the region, giving each city its individual character, as well as generally stymieing the outward growth of these cities.

The government did not relinquish control of Boulder City until 1959, when the town was incorporated. Boulder City's incorporation ceremony took place on January 4, 1960. The city council selected pharmacist Robert N. Broadbent as the town's first mayor.

The city charter, approved by the residents, prohibited gambling within the city limits. This provision still exists, making Boulder City one of only two locations in Nevada where gambling is illegal (the other is the town of Panaca). The Hoover Dam Lodge hotel-casino, which has a Boulder City mailing address, is located on a parcel of private land within the boundaries of the Lake Mead National Recreation Area, and is not within city limits.

Another casino on the other end of town is the Railroad Pass Hotel and Casino, which has a Boulder City telephone prefix, but is within the boundary of the neighboring city of Henderson.

Alcohol sales were permitted in 1969.

The 6th best place to retire

In 2009, Money magazine ranked Boulder City 6th in its annual list of the top 25 places to retire in the United States, which was based on affordable housing, medical care, tax rates and arts and leisure.

Boulder City maintains strict controls on growth, limited to 120 single- or multi-family residential building permits for new construction per year. Hotels are also restricted to no more than 35 rooms. These restrictions are defined in the city code of Boulder City.

There were 6,385 households out of which 23.6% had children under the age of 18 living with them, 55.8% were married couples living together, 7.4% had a female householder with no husband present, and 33.0% were non-families. Of all households 27.6% were made up of individuals and 13.1% had someone living alone who was 65 years of age or older. The average household size was 2.30 and the average family size was 2.79. 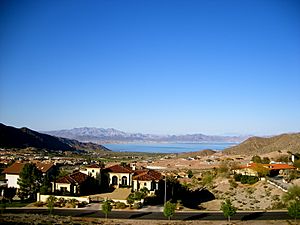 All content from Kiddle encyclopedia articles (including the article images and facts) can be freely used under Attribution-ShareAlike license, unless stated otherwise. Cite this article:
Boulder City, Nevada Facts for Kids. Kiddle Encyclopedia.