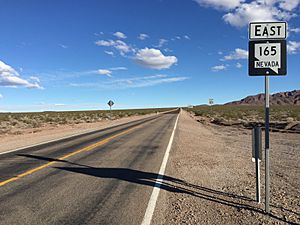 View from the west end of SR 165 looking eastbound 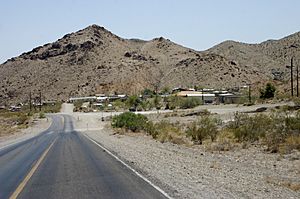 SR 165 begins at a junction with US 95 approximately 10 miles (16 km) south of Boulder City. From there, the state highway follows Nelson Road in a southeasterly direction through Eldorado Valley 11 miles (18 km) to its end just outside the town of Nelson. The town of Nelson was established in 1905 following several mining claims being discovered in the valley. Although the small community is still inhabited, the remains of many mining operations and abandoned structures can still be seen in the vicinity.

The route first appears on state highway maps in 1941 as part of State Route 60, a three-pronged route with each spoke connecting to the town of Nelson. The 16-mile (26 km) northwest leg connected to US 95 about 4 miles (6.4 km) south of Boulder City while the 10-mile (16 km) southwest leg reached US 95 further south via the Nelson Cutoff Road. The third leg of SR 60 ran east from Nelson 7 miles (11 km) to the Colorado River. Both the northwest and eastern legs of the route were completely paved by 1951.

State Route 60 remained largely unchanged until the Nevada began renumbering of its state highway system on July 1, 1976. The northwest leg of old SR 60 was renumbered to State Route 165 in this process, and by this time was realigned to be only 12 miles (19 km) long. The remaining legs of SR 60 have since gone unnumbered.

The entire route is in Clark County.

All content from Kiddle encyclopedia articles (including the article images and facts) can be freely used under Attribution-ShareAlike license, unless stated otherwise. Cite this article:
Nevada State Route 165 Facts for Kids. Kiddle Encyclopedia.