The endorheic basin lies north of the Piute Wash Watershed, of the north-south Piute Valley. The Piute Wash drains south, then southeast to the Colorado River.

The southern valley includes a habitat nature reserve for the Desert Bighorn Sheep, named the 'Highland Range Crucial Bighorn Habitat'. There are no public access routes into the habitat area, to protect the Bighorn. 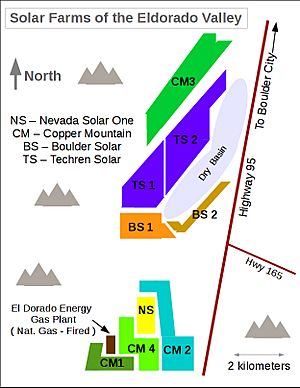 Map of solar farms in the valley

The northern valley contains Boulder City's "Eldorado Energy Zone" which is home to the 480 MW El Dorado natural gas power plant completed in the year 2000. Since 2007, it is also home to the concentrated solar power plant, Nevada Solar One, as well as a growing number of photovoltaic power stations, including:

All content from Kiddle encyclopedia articles (including the article images and facts) can be freely used under Attribution-ShareAlike license, unless stated otherwise. Cite this article:
Eldorado Valley Facts for Kids. Kiddle Encyclopedia.