Searchlight is an unincorporated town and census-designated place (CDP) in Clark County, Nevada, United States, at the topographic saddle between two mountain ranges. As of the 2010 census it had a population of 539.

According to Nevada Senator Harry Reid, who has written extensively about his hometown, the most likely story as to how the town received its name was that when George Frederick Colton was looking for gold in the area in 1897, he supposedly said that it would take a searchlight to find gold ore there. Between 1907 and 1910 the gold mines produced $7 million in gold and other precious minerals, and the town had a population of about 1,500.

Other stories on the origin of the name include a story that Colton was lighting a Searchlight brand match when he discovered the gold ore. Reid dismisses this story, saying that the Searchlight matches were not available in 1898. Yet another story says that Colton thought the area would be a good place because it was on a hill. Colton's mine was called the Duplex, because the gold ore was found on two levels.

Searchlight declined after 1917 but hung on as a stop on the Arrowhead Highway. In 1927, U.S. Highway 91 bypassed the town, and its population dropped to 50.

The town had a resurgence in the 1930s and 1940s with the construction of nearby Hoover Dam. The last gold mine ceased operating around 1953.

Searchlight experiences a desert climate with hot summers and cool winters. Searchlight's elevation makes temperatures somewhat cooler than lower-elevation areas in the Mojave Desert, such as Baker, California; Needles, California; and Fort Mohave, Arizona. However, summers can still be extremely hot. Due to Searchlight's altitude and aridity, temperatures drop quickly after sunset, especially in the summer. Winters are mild. Daytime highs in the winter are usually well above freezing, and nighttime lows drop below freezing only a few nights a year. 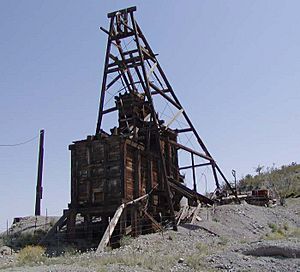 Old mine headframe south of Searchlight

There are 315 households, out of which 8.6% had children under the age of 18 living with them, 34.9% were married couples living together, 5.1% had a female householder with no husband present, and 56.8% were non-families. 48.3% of all households were made up of individuals, and 23.5% had someone living alone who was 65 years of age or older. The average household size was 1.76 and the average family size was 2.46.

In 1907, the "Searchlight Rag" by Scott Joplin was published. In the early 1890s, Joplin's friends, the brothers Tom and Charles Turpin, had done prospecting in the Searchlight area. The brothers' frequent stories of this experience, recounted to the patrons of their bar, inspired the title of the rag.

Searchlight has a public library, a branch of the Las Vegas-Clark County Library District.

All content from Kiddle encyclopedia articles (including the article images and facts) can be freely used under Attribution-ShareAlike license, unless stated otherwise. Cite this article:
Searchlight, Nevada Facts for Kids. Kiddle Encyclopedia.